Aliens visit the land of leeks and daffodils

The pilot of a police helicopter was forced to take evasive action to avoid a collision with a UFO as the aircraft was returning to the Ministry of Defence base of St Athan, near Cardiff.

The three airmen described the unidentified flying object as "saucer-shaped", and proceeded to pursue, getting as far as the North Devon coast. 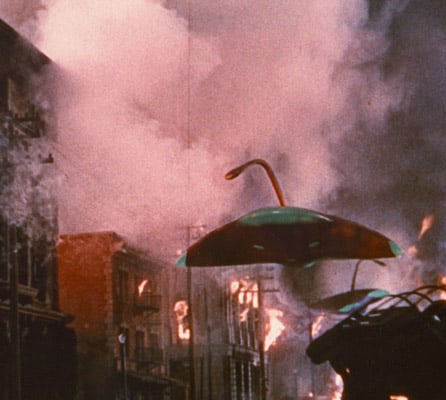 Journalist's impression of how the UFO might have looked

This sighting comes only weeks after the MoD began a full disclosure to the public of its UFO-files, in which they state that even air traffic controllers and police officers have seen mysterious craft in the skies over Britain.

The helicopter was stationary, hovering at 500ft and waiting for clearance to land on June 7, when the crew spotted the UFO hurtling towards them from below.

A spokesman for South Wales Police said that they could confirm the Air Support Unit had sighted an unusual aircraft and that this was reported to the relevant authorities for further investigation. The unidentified flying object closed in at great speed, aiming straight for the helicopter, which was forced to swerve sharply.

"They are convinced it was a UFO. It sounds far-fetched, but they know what they saw."

According to the South Wales Police, the helicopter crew crossed the Bristol channel in pursuit of the UFO, but lost sight of it and were forced to turn back due to low fuel. ®