Eva Chen speaks from the cloud

Interview Trend Micro’s CEO threw down the gauntlet to her competitors last week, proclaiming that hackers are ahead of the game and that the anti-virus industry “sucks”. 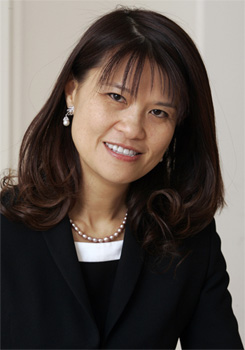 The change in direction for the company, which competes with the likes of McAfee and Symantec, came about because the nature of the viral attack has evolved, Chen told The Register in an interview last Thursday.

Changes in the malware landscape have led to the creation of multiple variants of different malware strains and targeted attacks. Traditional top down command structures for antivirus distribution are struggling to cope. Trend Micro had little choice but to invest in the new technology. However Chen, who has five patents to her name, admitted that investors nervously questioned her risky decision.

“Building that kind of infrastructure requires a lot of investment and time and I’ve been questioned by Trend Micro investors for the past three years ‘how come your cap ex increased so much?’ and ‘where did you spend all that money?’,” she said.

Chen was also fast to criticise her peers in the anti-virus game: “For me for the last three years I’ve been feeling that the anti-virus industry sucks. If you have 5.5 million new viruses out there how can you claim this industry is doing the right job?”

Chen, unsurprisingly, is convinced that cloud-client architecture, which Trend Micro has dubbed the Smart Protection Network, can bring down the shutters on pesky hackers.

The technology uses pattern comparison in the cloud and a client-side agent that is about 70 per cent smaller than Trend Micro’s previous offering. The firm's cloud databases will be updated within 15-30 minutes of new malware being identified, claimed Chen.

Explaining the rationale behind Trend Micro’s strategy, Chen said that network latency was a big issue that heavily influenced her decision to effectively edge the firm’s bets.

“If the query is too slow the user will not accept it which is why we didn’t redirect everything to the cloud because the scalability is very difficult for that kind of system,” she said.

“We utilised our knowledge on the client-side to come out with a thin client that would minimise the need to send a file up to the cloud, we did not send any traffic there, the only thing that’s sent is a query so there’s no privacy issue because no [personal] information is being sent to the cloud.”

But the technology isn't actually available on the market yet. In fact the two enterprise suites announced last week won't land until later this year.

The Threat Discovery Suite, which finds internal security threats on a network, is expected in the third quarter of 2008, while a Threat Mitigation Suite that provides analysis and policy review to protect against future threats will arrive in Q4.

HavanaCrypt ransomware sails in as a fake Google update

Difficult to detect, hiding its window by using the ShowWindow function in Windows
Security11 Jul 2022 | 5

Interpol, cops swoop with intel from cybersecurity bods
Cyber-crime26 May 2022 | 7

Execs keep flinging money at us instead of understanding security, moan infosec pros

Blames spam filters for brownout, warns fix could be 'disruptive'
Security11 May 2021 | 5