Good enough for Donald Rumsfeld. But not for you

User beware. Today's web browsers offer more security protections than ever, but according to security experts, they do little to protect people surfing the net from some the web's oldest and most crippling threats.

Like nuclear stockpiles during the Cold War, new safety features amassed in Firefox, Internet Explorer and Opera are part of an arms-race mentality that leaves online criminal gangs plenty of room to launch attacks. What's more, the new protections often take years to be implemented and months to circumvent. Meanwhile, shortcomings that have bedeviled all browsers since the advent of the World Wide Web go unaddressed.

Earlier this week, Mozilla patted itself on the back for adding a security feature to Version 3 of Firefox that's of only marginal benefit its users. It prevents users from accessing a list of websites known by Google, and possibly others, to be spreading malware. Opera Software, in a move its CEO proclaimed "is reinventing Web-based threat detection," added a similar feature to version 9.5 of its browser released two weeks ago, and Microsoft engineers are building malware blocking into IE 8.

Here's the rub: According to our tests over the past week, the Firefox anti-malware feature frequently failed to block sites compromised by one of the most prevalent SQL injection exploits menacing the web. Outcomes varied from minute to minute, but clicking on results returned from searches such as this and this (we strongly recommend you don't try this at home) led us to dozens of compromised websites even with Firefox's gee-whiz malware protection feature turned on.

Firefox 3 does block nihao11.com and the half-dozen or so other domain names that are referenced in the injection attack, so there is some benefit to the feature. But its inability to flag a huge number of websites that have been compromised shows the limits to such an approach. Similarly, researchers from Websense report here that they "found multiple phishing pages that still made it through" anti-phishing mechanisms that have existed for more than a year in Firefox. Because they're based on static blacklists based on behavior reported weeks or months earlier, these features often fail to detect quick-moving threats.

"These little anti-phishing things and anti-malware things, I'm not buying them," says Jeremiah Grossman, CTO of web application security firm WhiteHat Security. "Are we less likely to get hacked as a result of these features? No. If I was really the evil guy, I'll send you to a hacked up blog page with Firefox 3 and you won't have a good day." 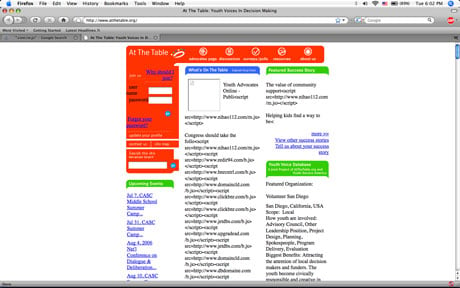 Meanwhile, within hours of Firefox 3 being released, researchers reported a security bug that could allow miscreants to execute hostile code on machines running the new browser.

Like IE, Opera and every other browser on the planet, Firefox also remains vulnerable to a variety of attacks that are as old as the World Wide Web. They allow miscreants to inflict all kinds of damage, including stealing a user's browsing history, spoofing trusted websites through cross-site scripting attacks (XSS), stealing user authentication credentials to banking sites and providing easy access to corporate intranets and end-user machines.

Of course, browser makers are by no means alone in shouldering responsibility for these weaknesses. Sharing equal amounts of blame are the eBays, MySpaces and Facebooks of the world for failing to resist the allure of untested features based on Adobe Flash and JavaScript, even when they deliver only minimal convenience over more traditional methods of delivering content. Also culpable are netizens everywhere, who collectively reward all these websites for adding bells and whistles that put our safety in jeopardy.

"I wouldn't tell you not to use the internet, but I would certainly never tell you you're safe, which is a pretty horrible thing to say to someone," says Robert Hansen, CEO of secTheory, a security firm that specializes in security of web applications. "I really don't think people are in a good position from a technology perspective to defend themselves with what they're given by default in a browser."

The situation is so dire in the minds of many security experts that they no longer trust any browser to keep them safe without taking extraordinary security measures. Grossman, for example, uses Firefox with the NoScript, Flashblock, SafeHistory, Adblock Plus and CustomizeGoogle add-ons for most of his web surfing, all to improve on the less-than-ideal state of today's web. When visiting financial sites, he switches to an obscure browser that he refuses to name. By treading off the beaten path, he says, he's less likely to get hit by an exotic zero-day exploit, which can sell on the underground market for tens of thousands of dollars if it targets a popular browser.

The obscure browser "is technically not more or less secure, it's just less targeted, which is the only thing I care about," Grossman says. As extreme as it may sound to some, Grossman says his browsing regimen is less hardcore than other people he knows in the security industry. Indeed, some of the more paranoid have entire physical machines reserved solely for sensitive transactions, employ boot-only browsers via CD-ROMs, or use virtual machines with limited features for the same purpose.

"I have very low confidence in any of the browsers' ability to keep me safe," says Don Jackson, a researcher with security provider SecureWorks. "What I have confidence in is the bad guys." One of the chief problems Jackson identifies with browser design these days: "Functionality is implemented first and security is tacked on."

Next page: 'You go to war with the army you have'

Next page: 'You go to war with the army you have'
Page: