80 Plus gives them a gold sticker

Dell is fussing over itself again for being such a brilliant shade of eco-friendly green. No surprise. We dare say Michael Dell himself weeps a single tear of amber when you drop a paper coffee cup into the trash.

But today, the vendor's nonstop stream of envirogratification is worthy of note: Dell says it's developed the first power supply unit (PSU) to earn a gold certification rating from US energy efficiency consortium, 80 Plus. It also claims the new internally developed PSUs meet July 2009 Climate Savers targets for server kit over a year ahead of schedule.

Such figures have an 80+ server PSU show about 14 per cent better efficiency over standard power supplies.

A check at the 80 Plus website shows Dell is in fact the only vendor to benchmark its server power supply unit with the organization. So in that sense, it's rather unsurprising the vendor was first. But that's not necessarily a jab at Dell — as the benchmark it achieved is still impressive for a major manufacturer. 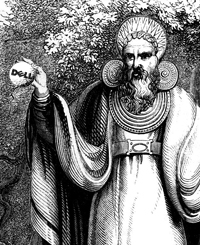 We suspect Dell is run by druids

To compare: for the less demanding desktop power supply unit benchmarks listed with 80 Plus, the vast majority (about 87 per cent) don't even achieve a bronze rating. Only 1 per cent have earned a silver rating, and none have the gold.

On the server side of PSUs, most vendors' "power efficient" supplies fall in the 80 per cent range, although the vendors obviously haven't bothered to push them through the 80+ site. Rackable just released a new unit that's 94+ per cent efficient, and it's a custom job.

There's the usual bombastic marketing claims from Dell that the new PSU is a sign the company is becoming "the 'greenest' technology company on the planet," and Dell does deserve some credit for taking the whole benchmarking thing more seriously than other members of Climate Savers organization.

Dell's power guru Albert Esser told El Reg it's surprising to him that most vendors in the industry haven't rated their PSUs with 80 Plus organization, despite the growing power consumption pains plaguing many data centers today.

He said the 80 Plus guidelines demand state of the art industry standards, and if you look at the baseline, vendors aren't really pushing things if they are happy with bronze. Esser said Dell hopes to make a bronze rating the minimum for all its power supply units in the future.

"This is where you see the difference between companies really trying to be green and those just riding the wave," he said.

Esser said the PSUs are certified and will be a part of Dell's next generation power efforts. He wouldn't specify when the units will be fitted in Dell servers, but said the company will working to offer them as soon as possible.

We recently profiled how Dell makes use of the power efficient supplies in its regular and Energy Smart server lines.®