Japanese teachers might feel a little uneasy about their job security, as one of the country’s schools has begun trialling Nintendo’s DS console as a way of teaching kids to read and write English. 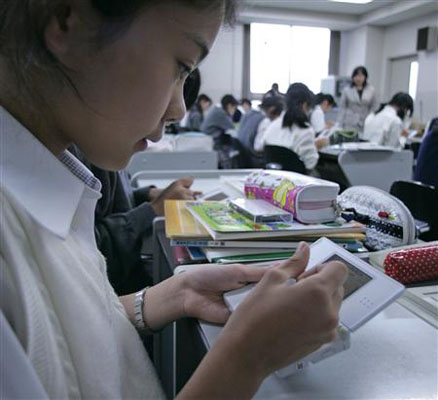 According to a report by Reuters, Japan's education ministry allows schools to decide on which teaching tools to use, whether it’s pencils and textbooks, or interactive games consoles.

The Tokyo Joshi Gakuen all-girls school opted for the DS and has been using the console in classrooms since May, as part of a one-year trial. Students use the console primarily for English vocabulary, penmanship and audio comprehension.

Junko Tatsumi, Vice Principal at the school, said that students are “really concentrating and have fun in gaining skills such as spelling".

The school clearly still has reservations about potential ‘abuse’ of the console’s features outside of English lessons. The vice principal added that once English lessons have ended, “students cannot play DS games outside - all consoles and software are collected" before home-time.

US students are more interested in listening to music during class though, it seems. Since February, around one in every 100 students at the Fort Summer High School, New Mexico have been encouraged to watch educational videos and listen to lectures on Zune players donated by Microsoft.

Almost all content is either created or recommended by the school’s teachers, with students encouraged to plug-in during class hours and on journeys to and from home. The trial aims to discover if such devices could eventually be incorporated into everyday education.