China has given more than a dozen government officials their marching orders over faked photographs of the highly-endangered South China tiger, Xinhua reports. 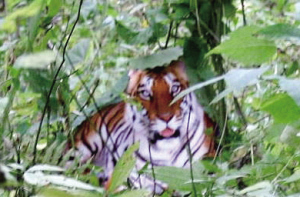 Last October, forestry officials in Zhenping county, northern Shaanxi province, published the photos citing them as evidence of the tiger's survival. The animal had not been seen in the wild since 1964, but suddenly posed for local farmer Zhou Zhenglong's digital camera (see pic), earning the photographer a reward of 20,000 yuan (£1,450).

The beast subsequently appeared on promotional posters designed to back officals' plan to establish a South China tiger natural reserve. However, the wheels came off the scam when police discovered the original picture of the tiger which Zhou had borrowed from a local in another village and suitably doctored.

Zhou was arrested on suspicion of fraud, while up to 13 officals were sacked, including deputy head of the province's forestry bureau Zhu Julong and top wildlife official Wang Wanyun.

The current status of the South China tiger (Panthera tigris amoyensis) is possibly around 20 individuals in the wild, and a captive population of 48 (1995 official figures, according to the Save the Tiger Fund). Some believe it is in fact now extinct in the wild. ®