For all Microsoft's strengths, and Gates’ supposed laser-sharp vision, the story of Microsoft’s success is as much down to the strategic weaknesses and blind spots of the of the competition. Only too late did they take Microsoft and its under-featured software seriously.

Novell wrestled with the snooty concept of the super network operating system while Microsoft closed the feature gap on NetWare. Unix vendors believed in the innate superiority of Unix over Windows and preferred to squabble for the crown of defacto Unix in a shrinking kingdom. Spreadsheet manufacturers dickered with the idea of putting their products on the then-new Windows 3.0. In mobile, Palm, like others, failed to learn from Mahatma Ghandi: first it ignored then it laughed at Windows CE, then it chose to fight - too late in the day only to see its lead in hand-held computing eroded.

Where Microsoft really shone during this time was in building an army of individuals outside Redmond developing and selling applications for Windows, thereby sustaining it and increasing its usefulness.

Developers and channel partners saw the potential Windows and all those applications offered: a mass market using computer software that was easy to use and more integrated than software from rivals. And all that on low-cost, Intel-based PC hardware. Developers were signed up to the Microsoft Developer Network (MSDN) and fed resources so they kept targeting Windows. Channel and retail partners got financial incentives, business and technical support. 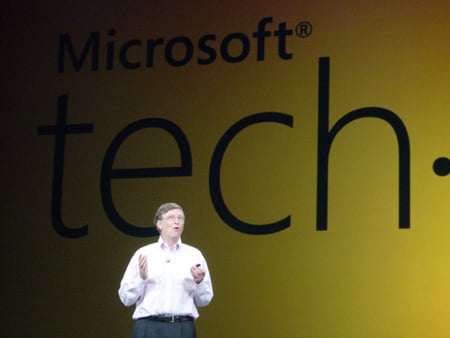 One man, one Microsoft, one vision

The year 2000 saw a major strategic gamble on Microsoft’s part. With so many platforms in place, Microsoft decided it was time to unify everything around a common framework, tied into one development environment. Also, it was time to answer the growing challenge of Java, which aimed to be write-once-deploy-anywhere software.

These followed a decade during which Microsoft under Gates had ridden the PC boom and reached a position of unparalleled power and influence without anybody really noticing or taking it too seriously. No longer the outsider, such was the ubiquity of Windows and Office and the company's influence in tech that - for example - no standard was an industry standard unless Microsoft was on board with it. It was became clear that Microsoft was no longer the outsider scrapping with giants like IBM to get ahead. The opposite was, in fact, true: Microsoft was becoming an IBM in terms of its size and power.

As such, Microsoft began serving its own interests and perpetuating its power and position. With this Gates, too, began losing his status as a computer revolutionary.

Microsoft was now milking the market demand for personal productivity that Windows had delivered by tying OEMs into restrictive licensing deals when it came to using Windows on their machines.

Microsoft was also starting to play politics with industry consortiums that were clearly intended to consolidate Microsoft and Windows and to wrong foot rivals, regardless of the implications for the end users. Microsoft drove formation of the Web Services Interoperability (WS-I) consortium with IBM to establish its early work on SOAP and the cumbersome WS- specs to deliberately exclude Sun Microsystems, the industry's steward of Java. It was no coincidence that Microsoft had only just unveiled .NET, its own web-services friendly stack and Microsoft's answer to Java, which had been developed six years earlier and was offering an alternative development platform to that offered by Microsoft.

IBM, long chafing at Sun's control of Java and eager to assert an industry leadership role on Java, quickly signed up to the WS-I to become Java's biggest spokesperson in the group. That was until Sun - finally - got voted in.

Not a benevolent monopolist

This landed Microsoft in hot water with the US Department of Justice and led to a long-running court case. The result? Microsoft was judged a monopolist. This is not an illegal activity in US law, it's just what you choose to do with your monopoly power that can be a problem. Microsoft was judged to have abused its power. Not the actions of a true industry visionary.

The trial lifted the lid on a number of other unsavory practices. I personally met with the inventor of a paint application who explained how the Microsoft suits had came to see him one day wearing their angry eyes: they offered to buy his application for Office at a price of their choosing, or they could build their own and shut him down. That was the deal. He chose the money.

The trial also revealed Gates as an ungracious individual: stubborn, defensive and unwilling to admit Microsoft had done wrong.

During a testimony given by video instead of in person, like any normal person subject to the laws of the land might do, Gates offered obfuscatory answers and said "I don't recall" so many times even the presiding judge had to chuckle.

It was a blow to brand Bill. His kudos as the modest geek who was above corporate politics, who played only in the impartial world of technology, who believed in building great software to empower the end user was gone. Bill was revealed as a corporate bastard screwing the little guy while his company became the Evil Empire.