Then there were the technology mispredictions from the Gates visionary. Microsoft's success has come from refining ideas others pioneered. This was a trait that served it particularly well in the world of the 1990s, where Microsoft defined its position as the quick innovator against slower PC and server software companies. When it came to going beyond the PC and server Gates and Microsoft have stumbled.

The TabletPC, a Gates' cause celebre, has failed to take off. The concept of Windows running everything in your life, not just the PC, is struggling against Java and Linux. After 10 years and $10bn investment IPTV has come to nothing, while the Windows-powered HD-DVD alliance with Toshiba collapsed in the face of the Java-powered Blu-ray alternative. The Windows-powered SPOT watches have failed to generate any consumer excitement.

On mobile, Microsoft is in third or fifth place, while in smart phones Windows has been overtaken by Apple's iPhone in North America in less than one year, according to Canalys. 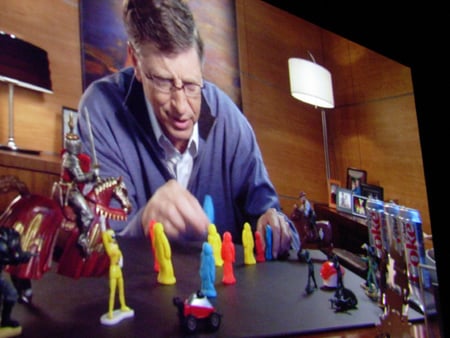 Gates works out what's next after the PC

Microsoft and Gates failed to anticipate or respond to the internet. MSN was launched in 1995, along with Internet Explorer, as other companies began moving to the web. MSN was an internet portal, the flavor of the time, and was soon filed away under the somnolent leadership of Mr Internet and former SGI chief executive Rick Belluzzo. The future was still a PC and server future as far as Microsoft was concerned.

Interestingly, Google popped up with something called internet search in 1996, one year after MSN launched, and was led by two up-and-coming kids from Stanford University, not some systems exec just jobbing it. Today Microsoft is paying the price for its lack of vision and poor execution. MSN is a number-three player with a third-rate search service and chief executive Steve Ballmer is trying spend billions of dollars to buy Yahoo! to catch up to Google.

The 2000s also saw Microsoft begin to pay the price for Gates’ focus on user “experiences” and lack of vision when it came to network-based security in the software he oversaw during the 1990s. The Windows' security architecture was exposed in a series of catastrophic viruses in the early 2000s. In 2000 there was the ILOVEYOU worm while Code Red ravaged inboxes a year later.

It took a year for Gates' to publicly address the problem and promise action. He issued his Trustworthy Computing memo to employees, which launched an internal initiative to make Microsoft focus on security. The danger, though, was already out there with years of legacy code unsuited to deployment in the networked environments of the internet age. The year following Gates' memo, the SQL slammer worm caused widespread denial of service attacks in SQL Server, hitting more than 70,000 victims in just 10 minutes.

Better to double down on what you know best. Focus on the user experience on the desktop. That led to Windows Vista. Gates unveiled Windows Vista in 2003, as Microsoft's "biggest release of the decade" - the biggest since Windows 95 we were told. It was an ambitious work, featuring a brand new XML interface and architecture, a web services stack and a search system that integrated with the server, called WinFS.

Reworking the desktop was too big a job, though. Faced with slipping deadlines and re-writing the code base, Microsoft re-set the vision and ripped out certain features, making them available as add-ons to Windows XP. WinFS disappeared all together. In a video interview on Microsoft's Channel 9, Gates admitted: "We tried to do too much we learned from that."

During the twilight years of his technical leadership at Microsoft, Gates must surely surrender his status as a person able to chart the future course of the industry and computing.

Two big challenges face Microsoft, and there is little evidence to suggest he saw either coming or acted in accordance with his visionary status. Those challenges? Open source and - yet again - the internet. This time, it’s phase two of the internet, dare we say Web 2.0.

His reaction to both, though, suggests he is not reading the tea leaves of trend and technology to chart a direction to the future as he did in the 1970s. He is cutting to fit something that suits Microsoft’s corporate objectives. As a company founder and former chief executive, that's not just his prerogative but is to be expected. This does not make him a genuine visionary, though. It makes him a man with an agenda.

That makes him another person like DEC’s Olson or Oracle’s Larry Ellison, serving their company’s interests. Not a Tim Berners-Lee, James Gosling or Tim Bray who contributed something we could all use - the web, Java or XML - and whose talk of what’s possible is not constrained by the agendas of their employers, if they have them.

The biggest issue facing Microsoft is how to deal with open source. Microsoft must square the ideas of what to release under open source licensing and its lingering issues over intellectual property claims with what it considers are its responsibilities to shareholders.

Gates' words on open source have been few and far between. When he has spoken, though, he does not sound convincing. His definition of open source is unrecognizable to everyone else. According to Gates: "There's free software and then there’s open source” and under open source “nobody can ever improve the software".

Far from being a visionary, Gates has been dragged into an uneasy compromise on this subject. In 2001 he called GPL "Pac-Man-like" for eating authors' intellectual property. According to Gates, Microsoft invented open source. The reality is that open source has forced Microsoft to lower its prices so that those in the developing nations now flocking to open source can afford to pay for Windows.

Next page: Save the eulogies
Page:
Corrections Send us news
80 Comments