Review This UMPC has been specifically designed for use in in the field - conditions where you'd never normally take a laptop. So if you're an engineer, an architect - or perhaps a sniper - this PC's for you.

The Getac E100 meets military and ruggedisation standards MIL-STD-810F and IP54, which basically means it's resistant to dust, water spray, humidity, shock and vibration, and can operate in temperatures from -20°C to 60°C. This device even has an optional hard disk heater just in case it's going to be booted up at temperatures below 4.4°C. 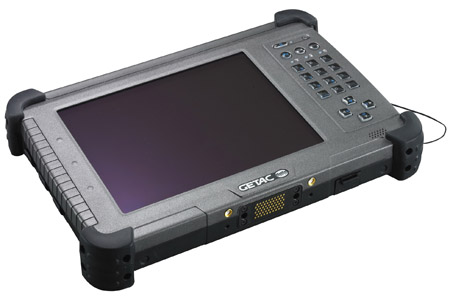 Being housed in a solid magnesium alloy chassis with big rubber bits all over it, it feels practically bullet-proof, but then that's the point.

When handling the tablet it does seem heavy, but in actual fact weighs in at a pretty respectable 1.4kg, making it the lightest in its albeit limited class. Including the thick rubber corners, the E100 is 40mm deep and measures 290 x 195mm, making it slightly smaller than an A4 sheet of paper.

Almost all ports have their own protective rubber plugs that can easily be replaced should they get damaged or split from too much use. Although the seals help protect the vulnerable ports, we've a word of warning: the USB slots are deeply recessed, so you may need an extension cable to connect some devices.

Under the armour, you'll find an Intel A110 processor, the Atom's predecessor, clocked at 800MHz; 1GB of RAM; an 80 or 100GB shock-resistant parallel ATA hard drive - bizarrely, there appears to be no solid-state drive option - and an Intel 945GU chipset, which borrows up to 128MB of the system memory for its integrated graphics engine.