PBEM The headlines last week brought us terrifying news: The North Pole will be ice-free this summer "for the first time in human history," wrote Steve Connor in The Independent. Or so the experts at the National Snow and Ice Data Center (NSIDC) in Boulder, Colorado predict. This sounds very frightening, so let's look at the facts about polar sea ice.

As usual, there are a couple of huge problems with the reports.

Firstly, the story is neither alarming nor unique.

In the August 29, 2000 edition of the New York Times, the same NSIDC expert, Mark Serreze, said:

"There's nothing to be necessarily alarmed about. There's been open water at the pole before. We have no clear evidence at this point that this is related to global climate change."

During the summer of 2000 there was "a large body of ice-free water about 10 miles long and 3 miles wide near the pole". Also in 2000, Dr Claire Parkinson at NASA's Goddard Space Flight Center was quoted as saying: "The fact of having no ice at the pole is not so stunning." 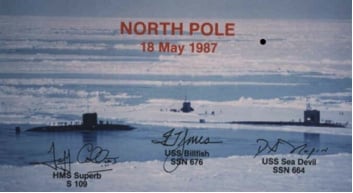 Secondly, the likelihood of the North Pole being ice free this summer is actually quite slim. There are only a few weeks left where the sun is high enough to melt ice at the North Pole. The sun is less than 23 degrees above the horizon, and by mid-August will be less than 15 degrees above it. Temperatures in Greenland have been cold this summer, and winds are not favorable for a repeat. Currently, there is about one million km2 more ice than there was on this date last summer.

So what is really going on at the poles?

The Tipping Point that wouldn't tip

Satellite records have been kept for polar sea ice over the last thirty years by the University Of Illinois. In 2007 2008, two very different records were set. The Arctic broke the previous record for the least sea ice area ever recorded, while the Antarctic broke the record for the most sea ice area ever recorded. Summed up over the entire earth, polar ice has remained constant. As seen below, there has been no net gain or loss of polar sea ice since records began.

Hansen is only telling half the story. In the 1980s the same Dr Hansen wrote a paper titled Climate Sensitivity to Increasing Greenhouse Gases [pdf], in which he explained how CO2 causes "polar amplification." He predicted nearly symmetrical warming at both poles. As shown in Figure 2-2 from the article, Hansen calculated that both the Arctic and Antarctic would warm by 5-6 degrees Centigrade. His predictions were largely incorrect, as most of Antarctica has cooled and sea ice has rapidly expanded. The evidence does not support the theory.

Warplane project may include AI in the cockpit, and comes as tensions rise with China and Russia
Security9 Dec 2022 | 12

Mask apparently addresses urban pollution and noise, but doesn't even seal to the face
Offbeat9 Dec 2022 | 117