Opinion Fresh contenders have entered the UK wind power debate, as a turbines expert funded by the Renewable Energy Foundation publishes an investigation into a hotly-disputed subject - the variability in output to be expected of a large UK windfarm base.

In a just-released article for the journal Energy Policy, titled Will British weather provide reliable electricity?, consulting engineer Jim Oswald and his co-authors model the output to be expected from a large, 25+ gigawatt UK windfarm collection of the type the government says it would like to see in service by 2020. Wind is generally seen as the renewable technology best suited to the UK climate, and so it forms the bulk of most renewables plans for Blighty.

One of the most frequent criticisms levelled at wind power is variability. That is, when the wind drops (or blows too hard) the windmills stop spinning and you get no power. To begin with, Oswald simulates the output rises and falls that might result from a lot of windfarms distributed around the UK by using Met Office archived data from different points up and down the land. Many wind advocates have argued that with enough windfarms, widely enough distributed, you would get more reliable power output as some windmills would always have wind.

Oswald's analysis says this isn't true, with calm conditions across pretty much all the UK being fairly regular events.

Analysis from 1996 to 2005 shows similar results: large, rapid, and frequent changes of power output being common occurrences ... any national power system has to manage under the worst case conditions likely to occur ... These are not extreme cases, whose frequency is so low as to render the events negligible. Rather, these are representative ...

If the government succeeds in building its mighty 25 gigawatts of wind base by 2020, according to Oswald's Met Office data-based model its output will dip to pretty much nothing fairly routinely.

The next line of defence for wind advocates is normally the idea of hooking up the UK's grid with high-capacity links to those of other European nations, creating a "Supergrid" with wind so widely spread that output would be sure to even out. But Oswald has bad news for that idea, too. He compares his modelled UK big-wind output with that which has been produced in recent times by other European wind bases, particularly the substantial German/Danish one. 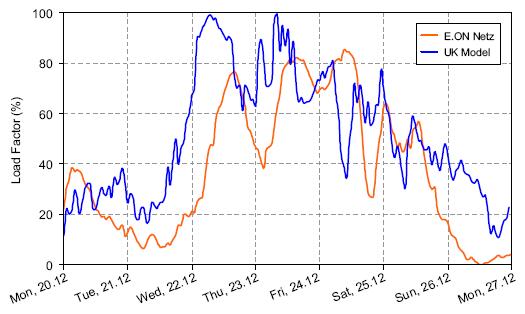 Ill winds blow nobody any good.

Not only does the large continental wind base exhibit nasty rollercoaster surges in aggregate output, these surges tend to match those to be expected in the UK. When the wind isn't blowing across most of the UK, it isn't blowing in Germany, Denmark etc. either. Worse still, this happens in the dead of winter when electricity demand is highest.

There is good agreement between the model and the [real-world European wind power output] data, which further supports the argument that wind output is controlled by the arrival and dispersal of large low-pressure systems moving over the coasts of Western Europe.

Being an engineer, Oswald examines the worst situations that occurred in his time frame - those that engineers would need to design the system to cope with. The nastiest situation that could happen would be early-evening flat calms in winter.

The relationship between wind power and demand was analysed by considering the moments of peak electrical demand in each of the last 6 years and ... the wind output for these moments ... each of them occur on a winter’s day between 5 pm and 6 pm, as this is the time when commercial and domestic demand combines into the day’s peak. As can be seen ... 16 January 2001 and 2 February 2006 were times of very little wind output ... and would likely fall into the category described as ‘low wind cold snap’ ... on 2 February 2006 the electricity demand in Britain reached its peak for 2006. The wind power model suggests that the output for the wind farms of Britain at that time would have been zero ... wind farm output for neighbouring countries has been determined for the same moment in time ... the measured output from NorthWest Germany, Ireland, and Spain was low ...

This passage in the report aroused particular ire from the British Wind Energy Association, speaking to the Sunday Telegraph on the matter at the weekend.

"When you look at the UK system as a whole, there is electricity coming from wind 100 per cent of the time," expostulated a testy spokesperson. "There is no moment in time when the output of the pool falls to zero."

Oswald's report partly agrees with this, saying that it is true that aggregate wind output is never exactly zero. Sometimes it's less than zero, though. It was during the nasty calm of 2006, for instance:

The [output of the UK's real-world] wind farms monitored by the National Grid [from 5-6 pm on February 2nd 2006] is shown as negative as the consumption of electricity used by these wind farms (to drive auxiliary loads) exceeded the total output.

And a supergrid to Europe wouldn't have helped, as everyone else had calms and high midwinter early evening demand too. That demand peak in 2006 was especially bad for wind power, but it was far from freakish. Such "low wind cold snaps" are routine, caused by midwinter high-pressure systems lurking on top of northwest Europe.

Like all such high-pressure systems they can easily hang about for a few days - sometimes longer - and according to Oswald this means you aren't going to cope with them by using pumped-storage kit. Such systems, typified by the Dinorwig installation in Scotland Wales, could lift water uphill using spare wind power on breezy mornings and let it flow down through hydropower turbines on calm evenings. They are much fancied by wind power advocates.

But speaking to the Reg yesterday, Oswald said that a realistically feasible UK pumped-storage base would only cope with one or two days of low winds at best. He said that there's a five-day calm most winters; and every twenty years or so you can expect a ten-dayer.

"I'm quite rude about pumped storage," he told us.

In his view, all this means that - certainly in a 2020 timeframe - the only feasible backup for the planned 25-gig wind base will be good old gas turbines. These would have to be built even if pumped storage existed, to deal with long-duration calms; and the expense of a triplefold wind, gas and pumped storage solution would be ridiculous. At present, gas turbine installations provide much of the grid's ability to deal with demand changes through the day.

The trouble is, according to Oswald, that human demand variance is predictable and smooth compared to wind output variance. Coping with the sudden ups and downs of wind is going to mean a lot more gas turbines - ones which will be thrashed especially hard as wind output surges up and down, and which will be fired up for less of the time.