'Bulge' wave power - a hard one to swallow?

The "Anaconda" is intended to harvest power using patented "Bulge" wave technology. A full-size device, according to the designers, could easily be 200m long and of such colossal girth that it would require at least a dozen chorus girls hand in hand to reach around it. 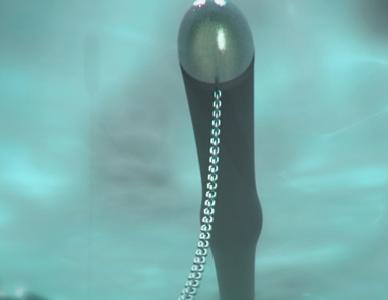 Anaconda may be able to satisfy our insatiable demands.

According to the Engineering and Physical Sciences Research Council, tough but flexible Anacondas moored off the coast will ride the billowing ocean swells of Mother Gaia to generate an immense, powerful squirt of fluid at one end. The process is described thus:

A wave hitting the end squeezes it and causes a bulge... to form... the initial sea wave that caused it runs along the outside of the tube at the same speed, squeezing the tube more and more and causing the bulge... to get bigger and bigger.

The mighty spurt produced by the bulging, turgid Anaconda is captured and drained of its energy by a hydropower turbine. It's thought that a full-sized Anaconda might have a peak power rating of a full megawatt. The theory is especially troublesome to work out, it says here, because "motions of each kind (vertical and horizontal bending, bulging, stretching, ovalling, twisting) all interact because of the compliant nature of the rubber".

The Anaconda is the brainchild of Emeritus Professor Francis Farley, a major arse-kicking boffin. He's a Fellow of the Royal Society and a winner of the Society's Hughes medal. His past career has included work on radar control at Britain's mighty cross-channel Dover gun batteries during World War II. Later, the prof did particle-punishing research at the CERN atom-smasher in Switzerland.

In wave power, Farley has been involved with a number of designs, including early stages of the "Pelamis" beam generation plan. Now he is progressing the Anaconda, which has already been through some lab tests at Southampton Uni. It seems as though the machines could produce 'leccy at 6p per kilowatt-hour; pricey compared to fossil or nuclear juice, but pretty good for renewables.

"The Anaconda could make a valuable contribution to environmental protection by encouraging the use of wave power," says Professor John Chaplin of Southampton.

"A one-third scale model of the Anaconda could be built next year for sea testing and we could see the first full-size device deployed off the UK coast in around five years' time." ®

Astroboffins discover when white and brown dwarfs mix, the results are rather explosive

350-year monkish mystery could be down to a merger