A gaggle of US non-profits realised early in June that without a direct link to the policy, Google.com violated the California Online Privacy Protection Act. 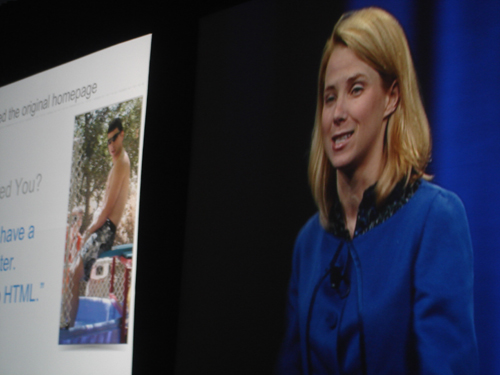 They called on Google to add a "privacy" link to its homepage even if complying with actual law would run counter to the commandments of web minimalism. It was widely noted that Google had no compunction about cluttering up search screens with links to its advertising sales operation.

Google told The Reg at the time that having its privacy tucked away was fine and dandy. "By having a link to our privacy policy one click from our home page, and because the privacy policy is easily found by using the search box on the home page, we comply with this statute," a spokeswoman said.

The new homepage would beg to differ.

Rather than cough to a mistake or an oversight, the Googleplex mother brain yesterday decided to have top Googirl Marissa Meyer (pictured) publish one of her diary entries on the firm's official blog.

The rambling memoir runs at a bizarre numerophilic tangent to what has actually happened. It does offer an insight into the disturbed mind of a senior Googler, however.

Channelling Rainman, Meyer writes: "And then I saw it: The next email had just a number ("37") in the subject - and no message text. What a weird form of spam, I thought. Why would anyone be motivated to just send a number? I searched for the user's email address to see what else had been sent. Interesting. Lots of numbers: 33, 53, and then a clue: '61, getting a bit heavy, aren't we?'"

That's quite enough of that. The upshot of this fascinating womble down memory lane (SPOILER ALERT!!!) is that the Google homepage has 28 words on it. Tell your friends. She's excited to tell us that adding the "privacy" link hasn't added to the count, because "Larry and Sergey told me we could only add this to the homepage if we took a word away".

For the record, Meyer devotes 608 words to recounting the thrills and spills of word count politics inside the Googleplex.

Here's a shorter version, should a less conceited corporate PR operation be forced to make a similar admission: "We fucked up." ®

Work to with Uncle Sam? Then source your hardware outside of the Middle Kingdom
On-Prem29 Nov 2022 | 9