Pioneer has pressed what it claims is the world's first 16-layer optical disc. It's keeping mum about the medium's format, but it's telling that each data layer has the same capacity as a Blu-ray Disc.

With 16 layers and a per-layer capacity of 25GB, that's a staggering 400GB in total, plenty of room not only for all the episodes of a TV series, but all of its seasons too.

And the capacity's twice the 200GB disc TDK was touting a couple of years ago as one possible future for Blu-ray. 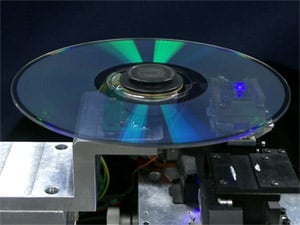 There's a catch: right now, the technology's read-only, so it's clearly destined for pre-recorded content.

However, Pioneer claimed it had licked the problem of interference from all the layers between the surface of the disc and the one the player's trying to read from. Pioneer said it applied an array of optical and signal processing techniques to create a "16-layer optical disc that can play back high-quality signals from every layer".

It's not just the layer data capacity that matches the Blu-ray spec - so do the optical specifications of the lens. The upshot, Pioneer said coyly, is that "it is possible to maintain compatibility between the new 16-layer optical disc and the BD discs".

And not only is the disc Blu, it's green too: "The 16-layer optical disc technology, capable of storing much more data than the conventional discs on one disc, will greatly reduce the number of discs to be used and therefore contribute to the conservation of resources," Pioneer chirped.