NPUC 08 Yahoo! is now using real-time automated algorithms to select news stories on its famous front page, claiming a 25 to 30 per cent increase in click through rate - and millions of dollars in additional yearly revenue.

In other words, Yahoo! is making more money than ever from shameless celebrity gossip.

Senior research scientist Deepak Agarwal unveiled the new system this morning at NPUC 08, an IBM-sponsored conference dedicated to all things AI. A small step on the long road to true artificial intelligence, the system sprung from a Yahoo! Research project dubbed the Content Optimization Knowledge Engine. Agarwal calls it Coke for short, and his fellow researchers are affectionately known as Cokeheads.

"This is a project we started about a year ago," Agarwal told his audience of AI obsessives at IBM’s Almaden Research Center. "The goal was to use data mining and machine learning to optimize the content shown to users on web portals, and a version of the system is now in production on the Yahoo! front page."

Agarwal wouldn’t tell us when the system actually went live. Clearly, he’s been told not to speak with the press – or at least The Register. But during his prepared speech, he said the company ran preliminary tests for "several months."

As they have for years, real live editors still choose the pool of stories for the Yahoo! home page. But on the page’s main news tab (the "Featured" tab), automated algorithms decide which of these stories get placed where – and how long they stay there. And each decision is made with an eye towards click through rate. 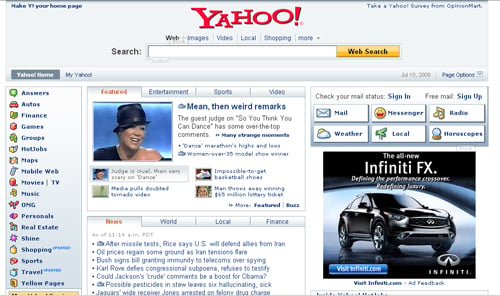 Based on the Kalman algorithm – a filtering method first developed in the early 60s – the system determines story placement by analyzing millions upon millions of user clicks as they happen. Agarwal and his team considered a method that juggled stories based solely on their characteristics – is it a Britney Spears story, say, or a Paris Hilton? – but they soon realized they could deliver a bigger click boost if they tracked the clicks themselves. "We track user responses," Agarwal said, "and then we respond ourselves - in real-time."

Yes, Agarwal says this has improved click through rates by nearly a third. And yes, with extra clicks delivering extra ads, this translates to several millions in extra revenue. Naturally, Agarwal hopes to bring the system to other parts of the Yahoo! portal.

But even on that tiny Featured tab – which holds only four stories – the technology has some growing up to do. Agarwal and crew hope to boost click through rates even further by personalizing article placement for each user. But at the moment, this doesn’t quite fly. Personalization still loses out to raw click analysis.

As Agarwal described Yahoo!'s new click optimizer, he was closely watched by John McCarthy, one of the AI pioneers who organized the seminal Dartmouth Summer Research Conference on Artificial Intelligence back in the summer of 1956. And when the speech was over, McCarthy spoke up from the auditorium's front row. "I'm a little puzzled," he said. "What does this have to do with AI?"

OK, the Yahoo! news page still relies on editors. And even the automated bit ends up making some rather simple choices. But in making those choices, it's already beating human thinkers. And there's more work on the way. "Over the past 50 years, we've lowered the bar for what we consider AI," Stephan Nusser, senior manager of the User-Focused Systems research group at Almaden and the conference's MC, told us. "We have to start with AI that's practical." ®