Research work on HP's never-ever-forget Memristor concept is proceeding apace. Memristor technology could provide a new type of computer memory that's much faster than flash memory. HP Labs' engineers in Palo Alto have demonstrated control over how the technology operates, opening the door, they say, to its incorporation into integrated circuits (ICs).

The researchers are members of the Information and Quantum Systems Lab led by HP Senior Fellow R. Stanley Williams. A description of their work was published in the advance online editon of the July issue of the journal Nature Nanotechnology. It involved the building of a 50 x 50 nanometer memristor switch with two layers of titanium dioxide (TiO2) between two nanowires (electrodes) deployed in a crossbar architecture.

The top and bottom wires are arranged perpendicular to each other. One TiO2 layer has oxygen vacancies and is a semi-conductor. The other has no such vacancies and is an insulator. The TiO2 layers between the point where a top line crosses a bottom line act a single bit cell. 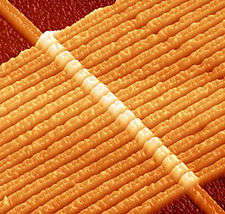 To the right is an image from Wikipedia of a circuit with 17 memristors sandwiched between two top and bottom wires, captured by an atomic force microscope. The wires are 50nm - about 150 atoms - wide. Each memristor is composed of two layers of titanium dioxide, of different resistivities, connected to wire electrodes. As electric current is passed through the device, the boundary between the layers moves, changing the net resistance of the device. This change may be used to record information.

The device's function could be controlled by changing the distribution of the oxygen atoms in this layer. A voltage bias is applied across the crossbars and causes oxygen vacancies to migrate from one TiO2 layer to the other, lessening its insulation capability and making it conduct. Such changes were associated with the ability of current to flow through the switch with 'on' and 'off' conductivity states equating to 1 and 0, or vice-versa.

Reversing the voltage bias direction sends the oxygen vacancies back into the semi-conductor layer and the insulating function returns to the other layer. This is how the switch could be turned off.

Interestingly the researchers found that the switch could also deliver in-between states, like an analog electrical circuit, meaning it could return more than two numeric values. Exactly how many hasn't been determined. (See also an article on trinary digits with nanowire technology.)

A digital memristor device could be a replacement for flash, being much smaller, very fast and non-volatile. HP calls such a device RRAM, for resistive random-access memory, and suggest a working prototype could arrive in 2009.

The researchers also speculate that in analog mode it could operate as an analog computer in a way thought to be similar to how the human brain operates as a neural network. A system would come to a conclusion about some issue by summing or subtracting lots of memristors' in-between states to arrive at a judgement about an issue such as face or speech recognition.

However, the prime market focus is to provide a flash memory replacement.

Wikipedia has an excellent Memristor article.