Battle of the supersonic white elephants

Farnborough There were a lot of things on show today at Farnborough, but probably if they were honest there was only one event which absolutely everyone here was determined not to miss. That was the first ever overseas (public) appearance of the F-22 Raptor, the latest, most unbelievably expensive uberfighter from the USA. In a scheduling decision which was certainly no accident, an RAF Eurofighter Typhoon went through its paces above the trade-only crowd immediately before the Raptor's appearance. 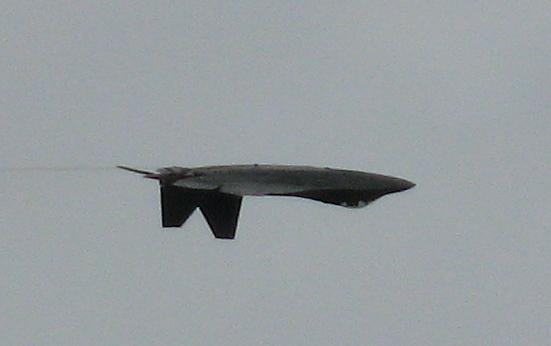 Blink and you miss it - Raptor's sole UK appearance.

The two planes are the last of the Cold War superfighters, built to fight the sky-blackening late-80s fleet of the Soviet Voyska PVO*. Both the Raptor and Eurofighter were designed to win control of the skies from planes like the Su-27 and Mig-29, the last generation of Commie planes. At the end of the Cold War, America was still equipped with the F-15 (and the F-14 carrier fighter), which some said could not reliably beat the new Soviet jets; the RAF had no decent fighter at all, having been equipped with the laughable Tornado F3 in order to keep the British aerospace industry alive.

In the end, nothing turned out the way the fighter plans said it would. The Soviet Union collapsed, and the massive tank armies stationed along the Inner German Border disappeared - along with their strike air and fighter cover. Until those armies went, NATO very reasonably worried about a lightning conventionally-armed invasion of West Germany. Would France, Blighty and the US really trigger a global nuclear war just to save Germans from communist domination? Maybe not, the Soviets might reasonably think; hence the tanks and fighters.

So the West thought it needed to hold the Soviets in conventional war - to slow down or stop the tank armies, and keep their air force back behind the Iron Curtain. There would be no easy option for the Soviets to snip off Germany and the Netherlands and then stop before receiving a French nuke. That's where the Raptor and the Eurofighter came in.

Nowadays, though, there don't seem to be many scenarios where Russia and the West would have a conventional fight. The Mig-29 and Su-27 duly turned up, and an even scarier Su-35 is planned, but nowadays the Russian design bureaux must live on gas revenues and export sales to the cheaper end of the Third World market, rather than the focused revenues of a vast empire. It is true that Western air forces might conceivably have to fight developing-world air forces equipped with exported Russian machines; but it's hardly the likeliest of missions for them. Furthermore, this wouldn't be Voyska PVO. This would be, probably, no more than a handful of jets, poorly maintained, poorly flown. Ordinary western fighters with modern missiles and electronic-warfare kit, backed by radar and tanker planes, cooperating with other forces and weapons such as imaging satellites and cruise missiles, could expect to win easily.

It's noticeable that the US Navy - the third biggest air force in the world at the end of the Cold War - plainly believe in this view of the modern world. The USN has not bothered to replace its F-14 Tomcats with a new generation of ultrafighter. Instead, the Top Guns of the future will fly in an enhanced version of the trusty F-18 multipurpose jet. 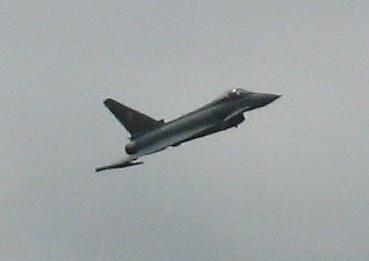 Costs the same, but no Stealth.

But the Raptor and the Eurofighter are here anyway, the thunder of their jets shaking the buildings here at Farnborough. The billing at the airshow is interesting, with the Raptor not present on the ground and visiting briefly just this once in the air on a day not open to the general public. By contrast, Eurofighters and pilots will be on hand all this week - reflecting the reality that the Raptor isn't available for export sale (and may not be for the foreseeable future), whereas this is emphatically not the case with the Eurofighter. The Raptor is hot - the press gallery was packed out for its appearance, whereas the humdrum Eurofighter drew a fairly small crowd.

But to people outside the aviation biz, both planes seem fairly irrelevant to the modern world. Not to mention expensive: each operational Raptor will have cost US taxpayers perhaps £175m once the planned production run finishes. The price per Eurofighter which actually flies operationally in the RAF will probably be about the same, if current rumours of cost increases on the final batch are true. This seems like poor value; the Raptor appears to be every bit as much an agile, overpowered superfighter and it has Stealth too.

But it hardly matters. Either one of these jets costs more than seven times as much as a hugely more useful Chinook transport chopper. The reality of geopolitics today is that these planes will never fight an equal battle against the Russian planes they were built to match. They might swat down a few rickety second-hand MiGs or Sukhois one day, above some Third World warzone; but it wasn't worth building them just for that, not when cheaper jets could do the job without more than minimal losses. Not when British and US ground troops are fighting and dying, suffering and losing battles unnecessarily, every day right now - often for lack of cheap helicopters and transport planes. A fighter pilot costs more to replace than a footsoldier, but his life isn't intrinsically more valuable. You couldn't tell that from the way the air forces of the West spend their money, however.

In the end, good as the air displays were this afternoon (many apologies for the pics, but at least they are genuinely related to the article) a nifty display isn't enough to make these two planes worthwhile. About the only way either could really pay its way would be in a fight against the other. ®

Combined with its Super Heavy booster, Starship stood briefly as the tallest rocket yet
Bootnotes7 Aug 2021 | 89