Farnborough So far at Farnborough, we've brought you news on all the mainstream, humdrum pieces of sky-tech: stealth superfighters, supersonic jumpjets, tiltrotor plane-copters for the rooftop penthouse dwelling billionaire in your life. By now, many of you will have been saying to yourselves, "That's all very well, but it's a bit mainstream. When oh when are we going to hear about the inflatable foam space re-entry pod/pant module and associated all-female Italian skydiving team?" 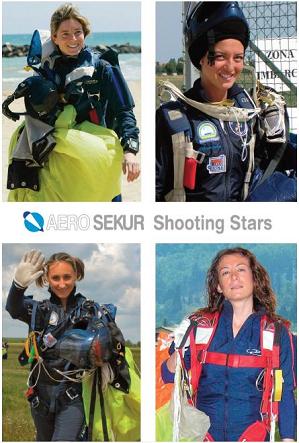 The faces of the Italian space-diving industry.

That moment has come. Today the Reg aerospace desk got the chance to view the ladies of the Aero Sekur Shooting Stars in death-defying aerial action above the Farnborough crowds, and later we spoke to Giacomo Giovangrossi, who is Space Unit manager at Italian aviation company Aero Sekur. As makers of various kinds of parachute and aviation survival systems, Aero Sekur find it very appropriate to be corporate sponsors of the Shooting Stars - the "first all female parachute team ever to perform at Farnborough", apparently. Aero Sekur says the team jumped wearing the latest products of Italian high fashion, "suits specially designed for the airshow". For those interested, here are the ladies' vital statistics: Maria Cristina Angelucci, 4700 jumps; Alessandra D'Annibale, 3000 jumps; Eva Tusset, 3000 jumps; Simona Minghetti, 700 jumps. For the benefit of those readers who happen to be our wife, we'd like to note that we had no personal contact with any of them.

But Aero Sekur isn't content with making mere ordinary parachutes. Like certain other companies, it's set its sights on a small, lightweight system - conceivably small enough to be mounted on a space suit - which would permit an astronaut to survive re-entry from orbit and descend to land by parachute. Ever since Heinlein's classic Starship Troopers - the book, not the film - the idea of space paratroops has been a compelling one. Power-armoured spaceborne infantry would seem a long way off in the real world, though Heinlein fans will be pleased to note that Aero Sekur has a body armour subsidiary. Nonetheless, smaller, lighter-weight astronaut escape systems could have real applications in the near future. The wish to keep bailout options open for space crews is a noticeable design constraint on manned spacecraft, and often imposes restrictions on operations day to day.