Farnborough Here at the Farnborough Air Show, the emphasis is mostly on flying machines and associated sky-tech. But there are a few exhibitors who don't have their heads in the clouds. One such company is Plextek, an electronic engineering consultancy outfit based in Cambridge, which is here this week showing off its portable battery-powered radar system - the "Blighter".

Blighter isn't intended to sweep the sky, but rather the ground. According to the company's specs, provided it has line of sight it can use the Doppler effect to pick out moving objects such as cars at 8km. A walking man will be detected at 3km and one crawling at 1.5km. 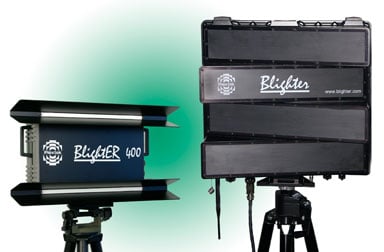 It's not the quick and the dead any more.

You can fit the Blighter 202 into a backpack - it weighs a bit more than 15kg - carry it to where you want and then set it up and turn it on. There's no rotating scanner. Rather, the set bends its Ku-band beam back and forth purely electronically, which is one reason for the low power consumption. Plextek engineer Nick Booth showed us a small Li-ion battery about the size of a kids' juice carton, and assured us that the Blighter 202 would run on it happily for six hours.

Another nice feature is the on-board hardware processing linked to a TCP/IP interface. Booth says that all you need to connect to a Blighter set remotely is a channel capable of carrying 15kbps IP traffic - he said the company often uses internet hookups in demonstrations. BlighterView interface software can be run on a variety of platforms - rugged laptops for instance, or custom portable solutions. It allows the radar blips to be overlaid on maps, aerial photos or whatever. One can also tell the software to watch specific areas, to ignore others and so on. It can even train cameras on blips of interest, and be set to sound different audible warnings for different types of target.

All this obviously would be very handy to those wishing to secure a perimeter deep in hostile but sparsely-inhabited country, and funnily enough Booth says that the system is already in service with special forces. This might mean the famous SAS, or equally the Special Forces Support Group, the newly-organised British "ranger" force based around the former 1st battalion of the Parachute Regiment. The troops of the support group, while a highly trained elite, aren't seen as "tier one" special forces. Speculation has it that they may be often be lumbered with security duties at forward bases while the big-shot SAS and SBS operators go out on missions. They might find the Blighter very handy.

Whichever of Blighty's secret elites is handling the Blighter, they seem to be pleased with it. Plextek have just announced a £1.75m order for more sets from the MoD under an "urgent operational requirement" buy, meaning that the UK forces want that particular product and they want it right now. Booth wouldn't tell us where the new Blighters are going, but the Plextek release notes that "Blighter radars offer exceptional target detection performance in rocky, mountainous terrain". So that would be Afghanistan, then.

If you fancy a Blighter for your own personal rooftop or campsite, Booth says Plextek would be happy to accomodate you - but it'll set you back in the neighbourhood of £60k. Read more about the Blighter or watch corporate video here. ®

Booth tells us that "Blighter" originally stood for Battlefield LIGHTweight E-scan Radar. Understandably - this being an almost Teutonically bad bit of acronym crafting - he added: "We don't like to talk about that any more."