At the moment, NebuAd says partners are required to notify users via email or letter or some extra words in their billing statements. But it seems that even these low standards haven't always been met. Back in April, Knology was notifying users with no more than a paragraph posted to its web site. And when we asked whether it should provide more direct notice, it said "We're still in that test mode. Long term, we don't know how that will play out."

After continued public pressure from Markey and his Congressional cohorts, Dykes now says that NebuAd will remove the cookie from its opt out. And it's working on a system that would notify users with messages lobbed onto their web browsers. But again, these would just be messages. There wouldn't be a button where you actually give your consent. 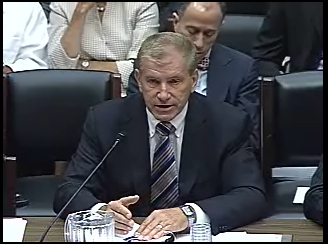 What Dykes didn't say during today's hearing is that if NebuAd is opt-in only, relatively few will likely give their consent - and the company will struggle to pull in the dough.

But at one point, Congressman Greg Walden called him out. "You're in this business to make money," Walden said. "Aren't you betting that there are going to be consumers who ignore the notices or don't understand them?"

Dykes answered by saying that more than half the net is propped up by ad dollars. "It's a legitimate desire on the part of [ISPs] to increase the amount of ad dollars they receive to help fund the internet," he said. "This is a way to do it - with really robust privacy controls."

"Wouldn't the most robust privacy control be an opt-in?" Walden replied.

This was a hearing about NebuAd. But blogger and ISP advocate Scott Cleland was on hand to remind Markey and crew that the world is plagued by other privacy concerns.

"Let's consider the depth and breadth of the intimate information that Google already collects on you," he said. "Everything you search for. Everywhere you go on the web. What you watch through YouTube. What you read through Google News, Feedburner, and Blogger. What you say in your emails. What you produce in Google Docs. What your family and friends look like through Picasa. Your medical conditions and history through Google Health. Your purchase habits through Checkout. Your call habits and voice prints through Google Talk. Your travel habits and interests via Google Maps. Your interest in places through Google Earth and Street View. Your personal information through Orkut, Gmail, Checkout, and others. Where you hang out, which will come through Android. Where you'll be or where you were through Google Calendar."

This doesn't forgive NebuAd. And we question Mr. Cleland's way with words. But it's a point worth making.

The $499 equipment cost and laggy latency give room for pause