Snapper unveiled for the uni-dexter

When you’re out with the kids, you’ll usually have to offload their accessories before you’ve got enough hands free to take a picture. But one intrepid designer’s single-handedly changing all that. 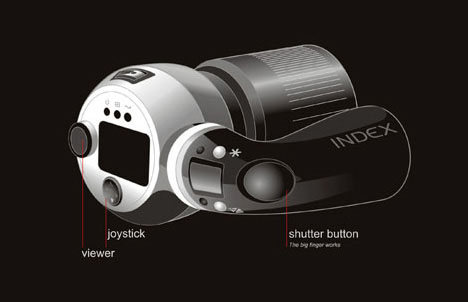 Mikhail Stawsky's concept design is called Index and it enables single-handed operation thanks to a handgrip that rotates around the camera’s main body. Pulling the grip from left to right allows you to have the handle on either side, but also causes the main body to rotate too.

Stawsky’s also built the camera’s flash into the end of the handle and, at the point where your thumb would rest, there’s a shutter button and display.

At one end of the main body is, obviously, the camera lens. Sadly there’s no indication as to whether lenses can be changed at whim, much like on a digital SLR. We suspect not - that would require two hands.

At the opposite end to the lens are all the standard features you’d expect from most modern cameras, including an LCD screen and a button for cycling through image modes.

A Canon logo also rests on one side of the Index shooter, but no plans to release the camera under a Canon brand have been mentioned.