Companies that take an iron fist approach to fighting software piracy are generally best served by not lifting a pirate group's code themselves to fix their own product.

Ubisoft, the French video game developer and publisher, was recently caught with its pants down, releasing a pirated hack as an official fix.

Ubisoft sells the PC version of its game Rainbow Six: Vegas 2 (RSV2) in a boxed copy format and through the online store, Direct2Drive.

When the publisher released a new patch for the RSV2 this month which added play modes and other goodies, customers were eager to update. Unfortunately the patch also added a check to confirm that a CD was in the PC before the game could play. This was obviously a problem for customers who downloaded the game through Direct2Drive and lacked physical media to validate.

Naturally, this theft prevention tool was meanwhile no problem for software pirates. A hacked executable removing the CD-check was soon readily available — although Ubisoft understandably forbade and punished discussion of the crack on its website forums when Direct2Drive customers came for help and advice.

Complaints about the physical media snafu kept coming, so a zip file was eventually uploaded by an Ubisoft employee to the help/support site, named "R6Vegas2_fix.zip."

But then Fileforums.com user Twingo discovered Ubisoft's little secret. The fix was, in fact, a cracked version of the .exe file modified by the pirate group 'Reloaded.'

Users on Ubisoft's official forums have provided proof, the "official" fix was Reloaded's crack by running the executable through a hex editor. 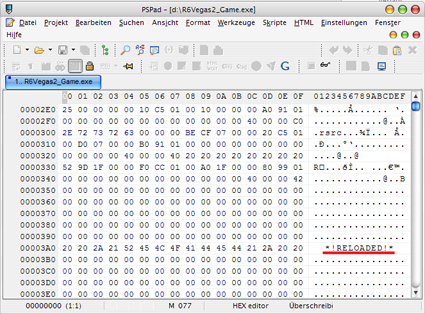 Posted by neilthecellist on Ubisoft forums

The file has since been removed from the website, so can't verify the claims. The initial response from Ubisoft via a forum post by a "UK Community Manager" was disbelief:

We're looking into this further as this was not the UK Support team that posted this, however if it is an executable that does not need the disc I doubt it has come from an external source. There'd be very little point doing so when we already own the original unprotected executable.

As soon as we find out more about this we'll let you know.

That was followed up later today with:

The file was removed from the site over a week ago now and the matter is being thoroughly investigated by senior tech support managers here at Ubisoft.

Needless to say we do not support or condone copy protection circumvention methods like this and this particular incident is in direct conflict with Ubisoft's policies.

Given that Reloaded is an illegal piracy group that regularly strips copy protection from video games and distributes them on the internet, it's extremely unlikely it will be crying foul by official means.

But at least it's an opportunity to laugh at yet another company that loads its software with so many copy-protection hoops to jump though that it ultimately only encourages piracy. ®