The US military's ongoing bid to revive grand old vertical lift concepts of the 1950s under the name "Heliplane" has gained a new lease of life. The financially-distressed main contractor is to be replaced by researchers at the Georgia Institute of Technology (GIT), and the airframe will now be made by renowned high-tech company Scaled Composites - of SpaceShipOne, Ansari X-Prize and Virgin Galactic fame. 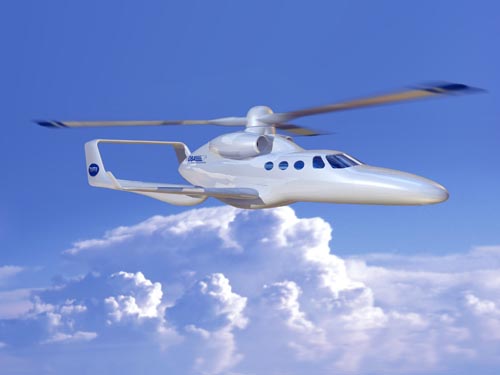 Sexier pix expected now that Scaled is on board

Regular readers will be well aware that the Heliplane project comes to us courtesy of DARPA, the Pentagon boffinry bureau which aims to make the bleeding edge of everyone else's tomorrow into the stone axe of America's yesterday. In this case, however, the possible Heliplane future will bear more than a mild resemblance to Blighty of yesteryear, as the design is more than a bit similar to the late, great Fairey Rotodyne. Like the Rotodyne, the Heliplane uses tip-jet driven rotors to land and take off vertically, and flies along first as an autogyro then more and more as a stub-winged ordinary plane with increasing speed.

Also like the Rotodyne, one of the big snags of the Heliplane was the racket made by the tip jets. Noise was always a problem for this technology, and is often seen as one of the main reasons it never gained wide use despite being more desirable in many ways than conventional transmission-driven rotors. The former Heliplane project leader, gyrocopter firm Groen Brothers Aviation, was given a six-month extension by DARPA to sort out the projected row arising from its tip jet design, but then money problems intervened.

Now, according to a sole-sourcing notice from DARPA, boffins from GIT will take the programme forward through phases 1B and 2 - which should see "experimental demonstration" that a 400mph vertical-takeoff-and-landing craft (VTOL) can be built. This would be a big step forward on the original Rotodyne, and indeed on the current cutting edge in VTOL lifters, the controversial V-22 Osprey tiltrotor.

It's not all over for gyrocraft true believers like Groen, however. The announcement says that DARPA "anticipates Groen Brothers Aviation maintaining a role in Phases 1B and 2 of the Heliplane program as a subcontractor to the GIT".

Meanwhile, replacing the now-vanished airframe maker Adam, there have also been reports that the Heliplane airframe design will now be produced by everybody's favourite pocket rocket company, Scaled Composites. Scaled is currently engaged in building a small fleet of two-stage suborbital thrillride planes for Richard Branson's Virgin Galactic operation. The involvement of Scaled would seem to promise at least one surefire benefit: The relatively dull biz-jet based concept art for the Heliplane (as shown above) should soon be replaced by something a bit snazzier. ®