NASA is reportedly negotiating to buy the Japan Aerospace Exploration Agency (JAXA) H-II Transfer Vehicle (HTV) as a means of ensuring it can fulfil its obligation to supply the International Space Station following retirement of the space shuttle fleet in 2010. 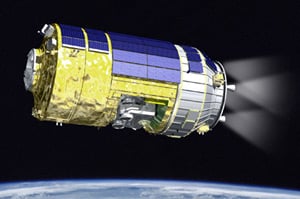 According to the Yomiuri newspaper, reported via Reuters, NASA is concerned that planned US spacecraft designed to take over from the venerable shuttles might not be ready within two years, and has accordingly opened dialogue with JAXA.

While Reuters was unable to get a comment from JAXA, it explains that Yomiuri "quoted the space agency as saying it has been unofficially discussing the matter with NASA since February". ®

Roundup Also: Virgin Orbit demonstrates it can drop stuff off a 747

Quick question, what the Hull? City khazi is a top UK tourist destination

No claps for you: Marketing director slams condom ad

How an augmented reality tourist guide tried to break my balls

Something for the Weekend, Sir? ... and displayed the results for everyone to see

A public-private partnership, with the emphasis on the public