Updated Here at the British Motor Show in London, there are lots and lots of cars to see. Quite a few of them have electric or part-electric power trains. A few of these use or plan to use advanced battery technologies such as lithium-ion. Only one has moved on further still, to a technology which promises genuinely usable electric cars, able to do pretty much everything an internal-combustion vehicle can.

That vehicle is the Electric Lightning sportscar, due to be unveiled to the press formally at 1pm today. The Reg wasn't able to get a sneak preview of the bodywork, but we have just had a chat with Chris Dell, MD of the Lightning Car Co. He tells us that as of one o'clock, car fanciers will be able to feast their eyes on new Lightning visuals at the company website, just as soon as the hacks here at Motor Show press day. 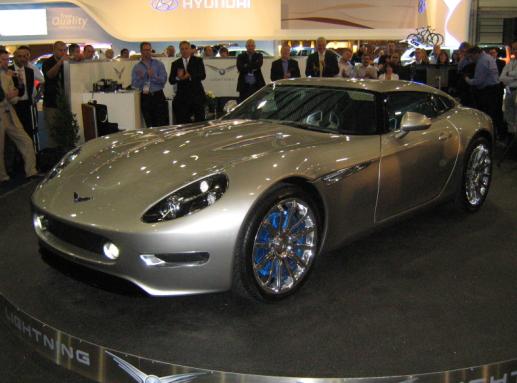 And there it is - just like the pics, really.

The Lightning is of special interest to electric-vehicle fanciers as it is one of two vehicles in the world using new lithium-titanate battery technology*. This scores over li-ion - as used in the famous Tesla Roadster, which has just gone into production - because it can be charged up within minutes rather than hours.

Where a Roadster driver has to stop overnight - or at least for the afternoon - after driving a couple of hundred miles, a Lightning driver with access to a fast-charge outlet could top off again in ten minutes or less and be on his way, just as though he were in a petrol car. Dell thinks this fully justifies the Lightning's £120,000 price tag - substantially more than its California-designed rival, which in most respects offers comparable performance.

"Tesla have done a good job getting to production - the Roadster is an impressive car," the Lightning boss told the Reg. "Why's the Lightning better? Because we've got fast-charge technology. It's future-proofed."

That said, you won't be able to speed-fill your Lightning from the ordinary wall socket in your garage. Domestic wiring can't carry enough juice without burning out, so home charging will take just as long as with a Li-ion car. But anywhere that three-phase industrial power is available, according to Dell, it would be a simple matter to provide a quick charging station.

"I'd like to be talking to Tesco about it," he says. "You're never more than 15 minutes from a Tesco in this country, and they've all got industrial power and forecourts. They're innovators - they'd probably go for it." However, Lightning aren't yet at the table with the UK's dominant retail globocorp.

As to the reality of fast charging, it seems that the Lightning's American Li-titanate batteries can charge up to 80 per cent "very fast - within two, three minutes" - but the last twenty percent takes as long again. "We say ten minutes," says Dell, "and that way we don't disappoint". But he expects that a driver in a hurry wouldn't need the full period.

Dell was keen to emphasise that the Electric Lightning is no gimmick, but solid technology in a custom designed package from an already-established car firm. (You can already buy a petrol Lightning.) Originally the electric car was conceived as a re-engining of the regular Lightning, but Dell says that plan proved unsatisfactory, and as a result the whole car has been redesigned starting from last October. The company now hopes to start deliveries in 2009, a significant delay on original plans.

Nonetheless, Dell is bullish about sales, though reluctant to go into detail on how many people have put down a deposit for an early production Lightning. Asked how many pre-orders he has, he would only say "enough". ®

And here's an updated pic with the cover off. Looks pretty much like the design, eh? We aren't sure we really get this unveiling business.

*The other is a sport-utility job from Phoenix Motors in the USA.