NASA: The Moon is not enough

Scientists argue for a return to the lunar surface

NASA and its international aeronautical cohorts have some serious explaining to do before they start rocketing folks to the Moon again.

They better convince the public why it's so important for our species to invest hand-over-fist just to root around some boring gray orbital dust ball - a dust ball we already stuck a flag in a full score and 19 years ago. 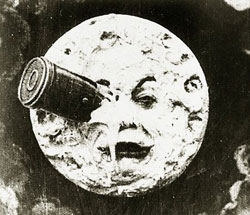 Perhaps they're preaching to the choir, but this week a gathering of scientists are giving this sort of time-tested anti-space exploration diatribe a workout at the NASA/AMES Research Center in Mountain View, California. They're in Silicon Valley for the first (theoretically) annual Lunar Science Conference. It's being run by the newly-formed NASA Lunar Science Institute — whose job it will be make dust vapor studies look sexy while doling out $2m grants to teams of lucky researchers.

But whether you support the effort or not, it's a respectable question to ask. Why the moon?

Professor Carlie Pieters of Brown University sets up some of the common pieces of contention:

"Apollo was exciting... but been there done that," she said. "We have enough problems on Earth to solve like climate change, hunger, and war."

Furthermore, Mars and the search for life are more compelling. Titan and Europa are exotic challenges. The big bang, string theory and dark matter are more fundamental, she added. What good can studying the Moon do us?

For one, Pieters argues that the early history of our unusual Earth/Moon system is uniquely documented and accessible on the Moon. Our closest neighbor has changed significantly less than than the constantly shifting face of the Earth. It's a witness to 500 million years of history and preserves it. Further exploration and study of the moon may have major implications in our understanding of how the solar system evolved.

The Moon conveniently shows us the bombardment history of the inner solar system. Further probing of its structure and composition may provide fundamental information on how planets form.

The Moon is also an ideally accessible laboratory for studying the impact process on planetary scales. And that's something we will eventually need.

"Because of the way the universe works, the story of human life is a story of extinction," said Paul Spudis of the Lunar and Planetary Institute (and half-empty guy when it comes to the cosmic ballet apparently).

Plan B to outer space

According to Spudis, the ultimate goal (and we're talking way into the future) is to move humanity off-planet. Life's too precious to gamble on one planet, in other words.

In the meantime, human spaceflight needs to be involved along with remote exploration because humans have capabilities that machines don't have and aren't likely to have in the future. That's the ability to reason with an exotic environment.

(Asimo is inclined to agree on this point.)

And of course, there's the innate urge to explore and learn that comes naturally to our species.

"The danger is we go to the moon and establish infrastructure, but lose sight of why we're there: to expand horizons," said author Andy Chaiken at the event.

"NASA, being an organization of engineers tends to fall in love with engineering. Cautionary note: beware of engineers," said Chaiken.

"When we do go back, I want us to remember what we got the first time. It's a place of spectacular beauty. It provides absolutely priceless science, but seeing our home world for what it is — it's a message we desperately need today." ®