Here at the Reg we aren't motoring hacks, we're technology hacks. So to us, most of the cars here at the British Motor Show are a bit boring. Internal-combustion engine? Come on. Battery car? Needs to be special. Hydrogen fuel cell? Even Nigel Tufnel has one (shared with his less famous wife, Jamie Lee Curtis). Anyway, fuel-cell cars are always battery hybrids. 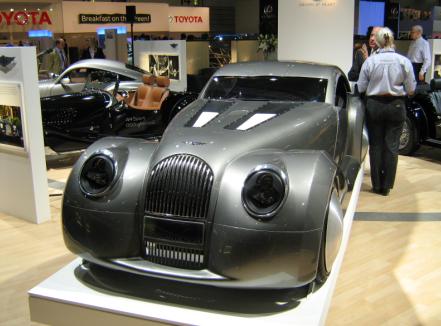 Hydrogen motoring - it's all about how light and slippery you are

But wait - actually they're not. Also on show here today is the LifeCar, a concept from famously eccentric British luxury handbuild firm Morgan. The LifeCar, unusually for a fuel-cell design, has no battery pack at all. Its PEM fuel cell stack is rather small, too, rated for only 22 kilowatts of electric output: a measly 30 horsepower or so. And yet Morgan expects to get 0-60 mph in seven seconds and top speed of 90 mph. How?

"It's all about using the right amount of power for the job," Morgan marketing director Matthew Parkin told The Reg today. "With a car this light and this slippery, 30 horsepower is plenty."

Morgan believe that current fuel-cell designs are much too heavy, hauling too much load about in the form of batteries, which then means that they need a lot of fuel cells, which means even more weight.

Even so, there's no way that fuel cell drive alone can deliver the acceleration that's promised for the LifeCar. It has to store power somehow, and it does - using ultracapacitors. Ultracapacitors hold only a fraction of the power that batteries do, but they can take it in and give it out again much faster.

The idea of the LifeCar is that the extra boost from the ultracapacitors will only be needed for seconds at a time. While driving at any speed the fuel cells will seldom have power to spare for topping off the ultracapacitors, but Morgan plans to exploit their ability to charge up very fast by using highly efficient regenerative braking. According to Parkin, the LifeCar will recover 50 per cent of the kinetic energy forfeited as it slows down, rather than ten per cent as in most current hybrids and battery vehicles.

The lightweight and slinky car will waste far less energy accelerating, overcoming friction and slowing down than others do, goes the thinking, and thus won't need so much power over time from the prime mover - the fuel cell. According to the tech spec, the LifeCar gets much of its lightness from traditional Morgan materials - "aluminium, wood and leather".

Morgan see the concept as more elegant than all-battery or hybrid designs, and point to the possible metallic-pollution waste burdens of battery-intensive designs. And Parkin isn't concerned about the future availability of hydrogen filling stations.

"There are plenty of people offering small-scale hydrogen filling points," he says. "If you want it enough, you can have it in your home. Our customers will be able to get hydrogen if they need it."