Western Digital is making a play for the enterprise storage market today by stripping the bulky heat sink attached to its 10,000RPM VelociRaptor drives and liberating the small form-factor disk that's been locked inside all along.

The number two hard drive supplier technically has offered a 2.5-inch VelociRaptor HDD since April, but claimed that so great was its speed the drive required a 3.5-inch mount to incorporate a built-in heat sink.

Its specs are similar to WD's current Raptor drives made for high-end consumers.

The new enterprise HDD is offered with up to 300GB raw storage capacity with a SATA 3 Gb/s interface and 16MB cache. But it does consume 35 per cent less power than previous generation Raptor drives, according to WD. Mean time to failure is benchmarked at a healthy 1.4 million hours.

One new feature is Rotary Active Feed Forward (RAFF), which is described as optimizing performance when the drives are used in vibration-prone, multi-drive chassis.

The VelociRaptor is presently the only small form-factor SATA 10K drive out there. Other vendors such as Seagate offer 10,000RPM and 15,000RPM 2.5-inch drives, but only of the SAS persuasion. ®

Because these things are important: we have updated our raptor size comparison chart for the announcement. 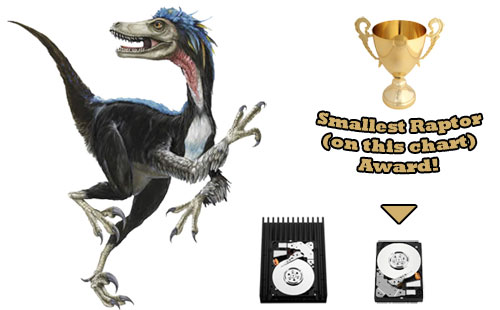