It's official: Samsung shows off i8510 8mp cameraphone

Rumours that the South Korean company was going to join the 8mp cameraphone crowd have been circulating for a while, now Samsung has confirmed it's launching the i8510 in the UK in August.

Much like the iPhone, the i8510 comes in 8GB and 16GB variants, with 3G and HSDPA as well as Wi-Fi. It also features GPS and a camera application that automatically geotags photographs with the location where they were taken. 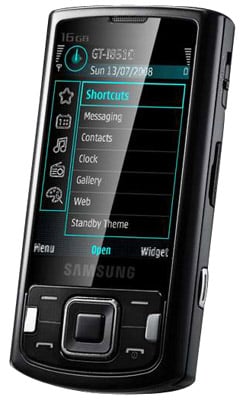 Come in iPhone, your time could very well be up

Auto focus, smile shot, blink shot and face recognition are all included with images being displayed on the phone's 2.8in, 16 million colour LCD. Additional storage is available with a microSDHC external memory slot that supports up to 16GB cards.

The only thing that's missing is a touchscreen, instead it sports a slide-out keypad. Other highlights include Bluetooth, FM radio, music player, DLNA hook-up and a USB slot. Samsung quotes up to 510 minutes talk time and up to 310 hours standby.

Pricing and operator details haven't been announced just yet.