Windows Vista by any other name

When the product sucks but you can't bring yourself to admit the horrible truth, what's the next logical step? Blame the message, the messenger or the recipient of the message. Simple.

Microsoft's normally bombastic marketing has begun blaming Windows Vista's poor uptake on the modesty of its own message, while exaggerating the vocal impact of tiny Apple, rather than admit there wasn't anything positive it could say about the operating system. 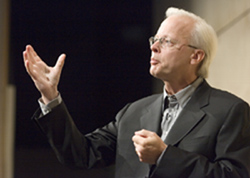 Ozzie: open source will be "perplexed"

While we've come to expect these kinds of tricks and word games from the guys and gals in marketing, we'd hoped the noble techies setting direction were above hunting for scapegoats and quibbling definitions.

Those leading Microsoft labs and its software architecture are blaming poor communications for the fact the company is now widely disregarded as a force for innovation, having passed the baton to those online and in open source. The fact it's late on internet services and search, conflicted on open-source, and bungled its desktop and browser strategies is not important.

Craig Mundie, Microsoft's chief research officer who's been wrong in characterizing or understanding the power of open source in mass markets, on Thursday said Microsoft has a perception problem not a problem as an innovator.

This is apparently the result of the fact he and Bill Gates, in his latter years at Microsoft, had been so engrossed in business they'd given up writing such ripping reads as Gates' epic The Road Ahead - a book that gave lightweight treatment to the internet - or Mundie's 2001 white paper giving his carefully considered thoughts on the "harmful" effects of open sourcing code, as stars the industry could reliably hitch its wagon to. Phew.

"The whole of the company is better than the perception," Mundie told Microsoft's Financial Analysts' Meeting on Thursday at its Redmond, Washington, campus. "What I've signed up to do is take this show on the road and make the public understand these technologies aren't born full grown."

For Ozzie, inventor of the hated Lotus Notes and now driving Microsoft's "software plus services" strategy, Microsoft will surpass the capabilities of Amazon, forcing even those hateful little trolls in the open source community to come to love its online services.

"Amazon's done a terrific job - we've learned a lot from it," praise from on high from the silver-haired creator of an email and collaboration package having its lunch eaten by Microsoft's Exchange Server and SharePoint Server. Only, Microsoft's building software for adults, which is why it's moving a little slower than everyone else in getting its APIs into the hands of developers.

"We have two problems," Ozzie patiently explained. "[First] A number of internal properties we've been selling as enterprise servers and wanted to create a service infrastructure usable by our search assets and the online assets, and [second] that our server business customers have SLA requirements that are substantial," Ozzie said. Microsoft's wanted a programming model that was consistent in the enterprise and the cloud.

Turner turns it on

Ozzie, the quiet-man of software acting tough? Surely some mistake?

Must have been taking lessons from Microsoft's number-two sales man, chief operating officer Kevin Turner who promised to "hit the gas" on marketing for the desktop. According to Turner, Microsoft's: "Not going to repeat the mistakes and opportunities [sic]" it made with Windows Vista hardware and software compatibility when it comes to Windows 7. Equally: "We don't regret it," Turner said of the Windows Vista experience.

At last, the real message: admit no mistakes. No wonder Microsoft is confused.®

Would you let users vouch for unknown software's safety with an upvote? Google does

POLL And so can you, because its vote-for-code tools are now on GitHub

The kids are all right... for Google: Web giant talks up 40 new Chromebook models, school-focused ChromeOS

Mountain View sees your kids at home this year, with its devices in their laps