The PSP: what's its future?

Rumours have emerged that suggest Sony could be working on a new PSP that combines gaming with the qualities of an iPod and iPhone. Could these be true? Let’s examine the evidence… 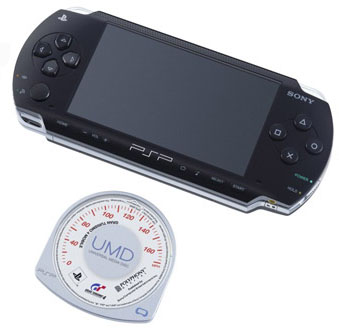 One of the PSP’s major stumbling blocks has always been its UMD format. Gamers may be willing to watch films on the console, but many often resent buying secondary copies of DVDs they already own in order to watch the title on a PSP.

Sony’s cottoned onto this and Jack Tretton, President and Chief Executive of Sony Computer Entertainment America, recently said at the E3 gaming conference in Los Angeles, US that: “I think the UMD has struggled. And that's an understatement. That's been a very frustrating thing. I don't think [UMD movies] were handled very effectively”.

UMD's popularity as a videogame format is dipping too. Market watcher Chart-Track told Register Hardware that UK PSP videogames sales were down 19 per cent for weeks one to 26 of 2008, compared to the same period last year. Chart-Track added that UMD was the only gaming format to see a decline in sales during the same period.

Sony’s suggested that building integrated storage into the PSP could be one way around the UMD problem. Tretton added that internal storage is something Sony has “definitely thought about it” for the PSP, because he thinks “that’s the trend moving forward”.

The company recently launched Go!View for the handheld console, enabling gamers to access a variety of telly content and films through Sky. But, to get gamers hooked on downloads Sony must equip PSP owners with enough storage capacity. This makes the case for an iPod Touch-esque 8GB, or higher, capacity of Flash storage seem like a very real PSP possibility.

A webcam is already available for the PSP, but who wants to carry around a bulky add-on when even Asus’ Eee PC has one built into its lid? Clearly Sony needs to consider building one into the PSP. 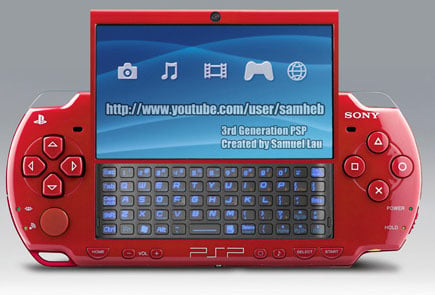 A webcam and keyboard could help reinvent the PSP

This may sound like a step towards the PSP phone, about which we’ve all heard the rumours. But a webcam could be teamed together with a microphone, turning the PSP into a videoconferencing console.

For example, a webcam could be integrated above the console’s screen, as shown in the above concept image. Whilst pictures have already surfaced that appear to show a microphone integrated into the side of the PSP’s body.

Of course, introducing internal storage, installing a webcam and adding a microphone mean the console’s internal layout would need redesigning. And that’s where the final piece of the PSP puzzle slots in - the rumours of a redesigned model, dubbed the PSP 3000.

Is this the inside of the PSP 3000? Image courtesy of PSP China

An unnamed source recently provided website PSP China with, what it claims could be, the internal structure for a so-called PSP 3000. The model would be Sony’s third redesign of the PSP – the first “fat” model being the PSP 1000.

We’ve analysed the picture from every angle and it’s very difficult to tell what, if anything is different from the PSP 2000. However, you could be looking at a future model that seeks to phase out UMD use in favour of Flash-based storage, and which adds in a microphone, webcam and – just possibly – a keyboard.

Must Sony reinvent the PSP to keep it alive? Or is the console already too far behind the times? What features would you like in the next PSP? Register Hardware wants to know your thoughts.