Toshiba has expanded its Camileo camcorder range with a pocket-sized model, perfect for anyone concerned about portability and price. 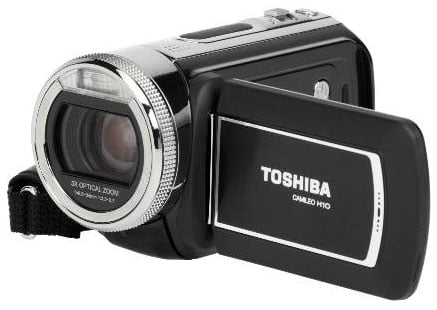 The H10 model supposedly sports an “attractive palm-shaped design,” which is…erm…handy, and weighs in at a pocketable 340g. So, the camcorder should be suitable for everything from filming your kids at the beach, to shooting a rock climbing film whilst hanging from a carabineer.

Video capture resolution is 1280 x 720 pixels and a 5x optical zoom is onboard. The camcorder encodes video into MPEG 4 format, whilst recording your films onto SDHC cards. The 10-megapixel sensor also allows high-quality still images to be captured.

Both video and still images can be viewed back on the camcorder’s integrated 2.7in LCD display, or connected into, say, an HD telly through the shooter’s HDMI port.

If you’re not quite up to Spielberg’s level yet though, then Toshiba’s included several useful video features. For example, night mode lets you re-enact The Blair Witch Project, whilst a range of special effects, such as black and white, could help give your film that Charlie Chaplin feel. Video stabilisation is also included.