Updated - but still NSFW In an attempt to upstage their former employer, a trio of ex-Googlers have launched a search engine of their own. They insist on calling it "Cuil" - pronounced "cool," apparently - and they say it "goes beyond today’s search techniques."

This includes flashing random pornography when you search for information about a Grenoble-based quantum computing researcher. 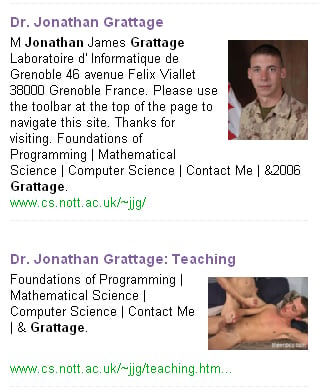 Cuil achieves this "richer display of results" by indexing a whopping 120 billion web pages. According to the company, that's three times more than any other search engine.

You see, unlike Google, Cuil is designed to analyze the context of each web page and the concepts behind each query. As CEO Tom Costello puts it, "Cuil presents searchers with content-based results, not just popular ones, providing different and more insightful answers that illustrate the vastness and the variety of the Web."

Jonathan Grattage points out that those little pictures aren't on his web site and have nothing to do with him. But he doesn't know search like Cuil knows search. Costello researched search engines at Stanford University and IBM. His wife worked for Google. And so did two other Cuil founders.

We asked them to explain their unique insight into the world of search. But we've yet to hear back. ®

"We want people to be able to determine clicks by looking at a picture rather than reading through 200 some words," says Cuil vp of communications Vince Sollitto. "But that's a significant challenge, something that's not offered on the web today...We've made some progress on it, but there's still a lot to do."

"There was overload on servers, and when that happens - and you lose a machine for even a minute or so - the images that machine is going to provide can't be used, and so you then have to choose from the remaining results you have," Sollitto says. "And if that machine had key images, then the quality of your results are severely affected."

Just to be sure, we asked him to repeat this argument. "If the machine that had the image we intended to provide was down, then we may have defaulted to a less than ideal image," he replied. We would call that a design flaw.