Intel has scored a massive low-cost laptop deal with Portugal's government to provide primary school students with 500,000 computers based on the company's Classmate PC notebook design.

Chipzilla plans to deliver the half million machines — which will be manufactured under license in northern Portugal — in the upcoming school year.

The deal was inked as a part of an education technology program called the Magellan Initiative, launched today by Portuguese Prime Minister José Sócrates and Intel Chairman Craig Barrett.

"This new collaboration with Intel underscores Portugal's commitment to advance quickly toward a knowledge-based economy," Sócrates said. "By equipping our schools with state-of-the-art computing technology and Internet connectivity, we hope to hasten the transition to economic models that benefit our citizens." 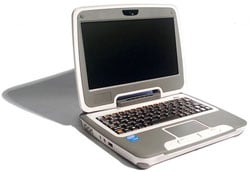 According to the Associated Press, Socrates said the computer would be distributed to students under the government's existing subsidized "e-School" program. The cost to students will be determined by the family's income, with a maximum price of about €50 ($78).

Intel's pact also fans the flames of a market rivalry between itself and the non-profit One Laptop Per Child (OLPC) foundation. Both companies compete to sell small, cheap notebooks geared towards the education of youngsters in developing countries.

Early this year, Intel walked out of the OLPC project after receiving a frosty reception due to its continued sales of the Classmate PC design.

OLPC's visionary Nicholas Negroponte slammed Intel before it joined, telling the company it should be "ashamed of itself" for undercutting his own scheme to get affordable laptop computers to children in developing countries.

After Intel joined the organization, Negroponte continued to press for ending sales of the Classmate laptop. After only about six months, Intel was fed up. OLPC denied Intel's departure was about rival machines, but claims relations broke down because of "a complete lack of cooperation by Intel on software, learning etc." ®