Who calls a phone Tocco, I mean really

Review Samsung has been keen to tap into the touchscreen trend, with recent models like the F700, F490 and its Armani phone collaboration all following the iPhone’s lead into fingertip-tapping control. 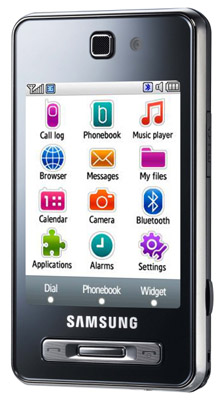 The Tocco is smaller than the iPhone, measuring up at compact 98.4 x 55 x 11.6mm and weighing 106g. But this means you don’t get as much screen real estate for viewing, nor indeed finger space for tapping.

That makes the Tocco more pocket-friendly, yet it also packs in a five-megapixel camera and HSDPA 3G connectivity, though it lacks Wi-Fi. So far, so like the F490. But the Tocco does introduce some new touches, including a revamped TouchWiz user interface, which also adds applets to the standby screen.

The Tocco works the minimalist touchscreen look pretty well. Under a Samsung logo at the bottom of the black faceplate there’s a discreet rectangular manual control pad, featuring standard Call and End buttons, plus a central menu key. There’s a touch of chrome around the sides of the phone, and a brushed metal back panel.

Samsung includes in the box a slide-on back plate with a rigid leather-look cover attached, offering some added screen protection.