It's been a couple years since Dell last had a major refresh of its Latitude business notebooks. Lo and behold, there's all these young, sleek rivals on the scene these days.

Rather than buy a toupee and flashy car, Dell is re-imagining its Latitude line by mixing some sex appeal from consumer notebooks with a business-friendly feature set designed to appeal to more youthful workers. These young folk are apparently to be known as "Digital Nomads". Shudder with us for a moment, and then we shall speak no more of it.

Announced today are the new Latitude E-family notebooks, ranging from a 12.1in ultra-portable to a 15.4in mainstream laptop. 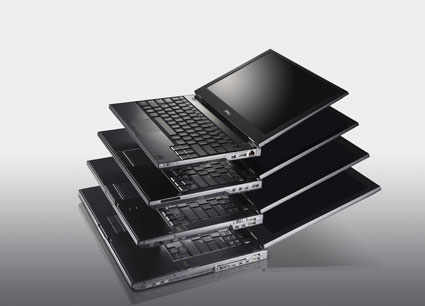 The update makes some notable changes to Dell's traditional case design. Most apparent is that for the first time several Latitude models will be offered in a variety of colors. You're limited to a spectrum of understated, business-like colors with names like "regatta blue" and "regal red" mind you, but colors nonetheless. And the kids love colors.

Dell's also added a stronger metal hinge and latch system — which thankfully still blends with the aesthetic Round Rock desired. In addition, Dell has added features such as a backlit keyboard, built-in touchless RFID SmartCard sensor, built-in fingerprint reader, and a surprising battery life of up to 19 hours. More on that last part later.