Hundreds of Mac users have been snared in a phishing scam that coincided with the glitches in the roll-out Apple's MobileMe service. 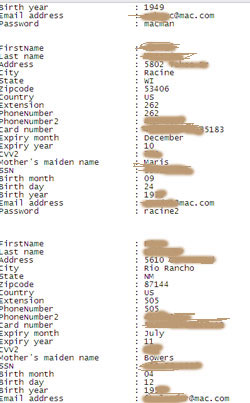 The graphic to the right, which has been edited to remove personally identifying details, shows some of the data that's been available.

The information was phished using emails that began circulating around the same time Apple began its ill-fated transition from Mac.com to Me.com. The scams bore subjects such as "Billing problem." Following the link as recently as Tuesday while using Apple's Safari browser, we were taken to an authentic-looking page purporting to belong to Apple. It asked users to reinstate their accounts by entering a dizzying array of personal details. (Interestingly, while Internet Explorer warned us the page was a scam, neither Safari nor Firefox flagged it.)

Among those who took the bait was someone in Desiree Holtadams's home. She said the confusion caused by the MobileMe transition caused her to lower her guard.

"I was wondering if they might have switched me over to MobileMe," she told The Reg. "A few weeks ago, there was no access to the Apple account at all for us."

An Apple representative didn't respond to an email requesting comment for this story. 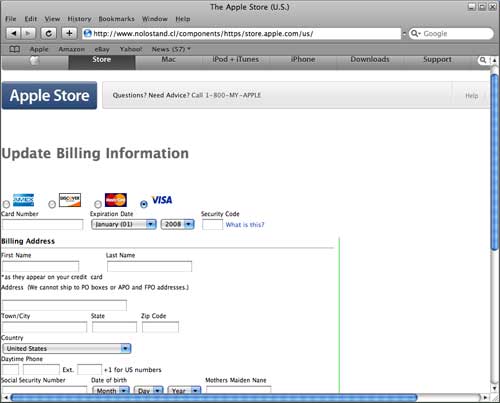 Several of the Mac.com victims we spoke to reported getting phishing emails purporting to come from iTunes. Evidently, Apple users are a popular target. ®