IDF Full of what we call "self mettle," Intel has championed its "highly anticipated line" of big daddy solid state drives (SSDs).

Units for laptop and desktop systems will ship in the next 30 days with Intel offering up both 1.8-inch and 2.5 inch gear. The X18-M and X25-M products come with all the associated miracles of SSDs, including higher performance, quieter operation and lower energy consumption than comparable spinning disks. PC makers can pick from 80GB and 160GB drives, although the 160GB kit won't arrive until the first quarter of 2009. (Much of this information leaked earlier in the week.)

If you want to get Extreme, then the X25-E is the server SATA SSD for you. 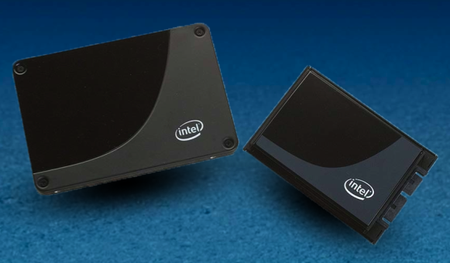 Intel swears that its SSDs are better than the stuff from the "other guys" for three main reasons.

But we've all heard Intel make write amplification factor claims before, if you know what we mean.