A turtle with a GPS tracker attached to its shell has accidentally stumbled across a teenager’s secret horde of cannabis plants. 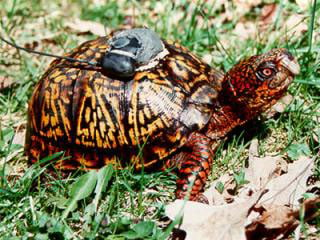 According to a report by local US news service WUSA, “Jimmy the Turtle” was being tracked by GPS for “research purposes” in Rock Creek Park, Washington when it wandered into a remote section of the park.

A ranger in charge of the turtle went to retrieve the animal and discovered that the animal had walked – albeit slowly – into the middle of a covert marijuana field.

"He felt like he had a layer of security, but he probably never counted on a turtle with a tracking device leading us to that location and finding the field,” said Sergeant Robert Lachance of the US Park Police.

The GPS turtle’s pot discovery skills also seem to have made an impression on the University College of Los Angeles, which plans to let GPS-enabled turtles loose to find cannabis in obscure areas. It’s not clear if student dorms will be included...

With Trump on the way out, 2021 is going to be digital levy a-go-go time

Even the Fatherland Front Central Committee is a no-fly zone

Bork!Bork!Bork! Somewhere there is always an IT pro who warned this might happen