Scientists believe they have deduced what sustains the noodly appendages of a galactic "spaghetti monster" - actually Galaxy NGC 1275 in Perseus - which displays "a mammoth network of spaghetti-like gas filaments around a black hole", as New Scientist puts it. 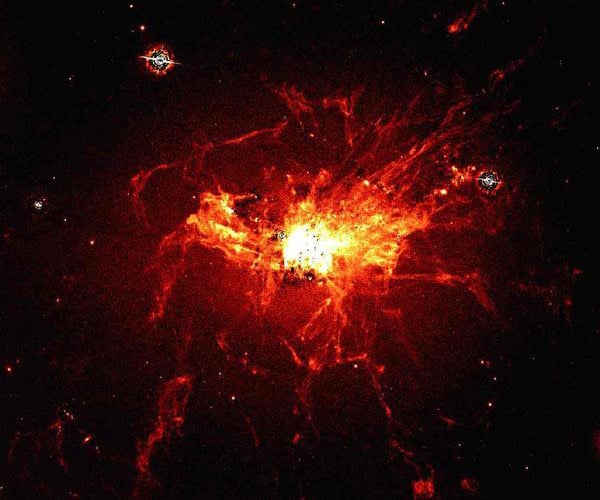 NS explains: "As the black hole sucks in gas from its surroundings, it powers jets of matter that produce bubbles of energetic particles in the surrounding cluster gas. As these bubbles grow and rise, cooled gas from NGC 1275's core gets drawn into long tendrils in their wake, like the strings that trail behind balloons."

Fair enough, although until now no one had been able to work out why these delicate filaments weren't destroyed by the immense magnetic power of the galaxy. Cue a close perusal of Hubble snaps of NCG 1275 by Andrew Fabian and colleagues at Cambridge University.

They noted that the filaments - extending 300,000 light years - are actually comprised of "a number of thin threads" measuring 20,000 light years. These are "so tenuous that magnetic fields are the only thing that can protect them from being destroyed", according to Fabian.

The fields are believed to "get their start" close to the black hole, and while the researchers estimate they're a mere "0.01 per cent as strong as the field on the Earth's surface", they're able to "hold onto" the filaments by acting on charged particles (protons, electrons, etc) in the filaments' gas.

The result of this influence is to prevent the gas, weighing in at a modest few hundred degrees Celsius, from "evaporating away into the 40 million °C sauna of surrounding cluster gas".

Although the filaments appear to lead a fairly precarious existence, their speed indicates they've been resisting evaporation for more than 100 million years, during which the sustaining magnetic fields may also have prevented their gas collapsing to form stars.

If so, this could help scientists resolve a cosmology poser: why there are "fewer high-mass galaxies than models predict". Astronomers reckon some massive galaxies are prevented from expanding further by black holes which are "devouring their surroundings and spewing out jets".

These jets heat up the galactic gas to such a degree that it simply expands out into the ether, preventing star formation. Patrick Ogle of Caltech suggested that gas filaments such as those demonstrated in NCG 1275 might also be a contributory factor in some cases in explaining "why these galaxies don't grow bigger than they do".