Dell thrives in up server market

The server biz is still booming thanks to customers buying up x86 boxes. The current worldwide economic agitation doesn't seem to have affected with major vendors with all of the big names shipping more metal in the second quarter of 2008 than the same period last year, according to the latest bean counting from Gartner.

Global shipments of servers grew by 12.2 per cent in Q2 compared to the same period last year, according to Gartner. Total revenues from servers also grew 5.7 per cent worldwide year-over-year.

The biggest gains were from Dell, which remained third in overall revenue — but licked a lot of stamps in Q2 and shipped nearly 25 per cent more machines year-over-year.

"In spite of economic constraints in some markets like the United States, on a worldwide basis, servers continued to grow in the second quarter of the year," said Jeffrey Hewitt, veep of research at Gartner. "The most significant driver in the quarter continued to be an upswing of x86 server replacements that started in the first quarter." 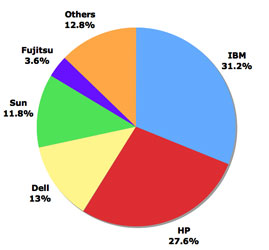 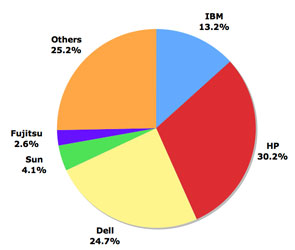 With growing interest in x86 servers driving the market, RISC-Itanium Unix servers fell 7.9 per cent in shipments. Despite this, the boxes grew 9.4 per cent in revenue, indicating that high-end (high-margin) systems are still are finding happy homes, according to Gartner. ®