Aussie has answer to save Earth from asteroid attack

An PhD student with the University of Queensland's School of Engineering has won top prize in an international competition for her plan to wrap a giant asteroid with reflective sheeting to prevent a collision with the Earth.

The asteroid, Apophis, is estimated to be perhaps 270 metres across and it will pass close to Earth in 2029, well inside the orbit of the Moon and closing in to the same sort of distance as geosynchronous satellites.

Despite being considerably smaller than the 15km wide asteroid that struck the Earth in what is now the Yucatán Peninsula, in south east Mexico - and more than likely caused the extinction of the dinosaurs, if it collided with Earth it would strike with the force of more than 110,000 Hiroshima atomic bombs.

Mary D'Souza put forward her proposal and took out the top prize in an international competition to find new ways of stopping asteroids from hitting our humble, little planet.

With her paper entitled A Body Solar Sail Concept for the Deflection of 99942 Apophis, D'Souza beat entries from around the world in the Space Generation Advisory Council's Move An Asteroid 2008 competition and will travel to Glasgow at the end of September to present her plan at the International Astronautical Congress, the world's largest space conference. 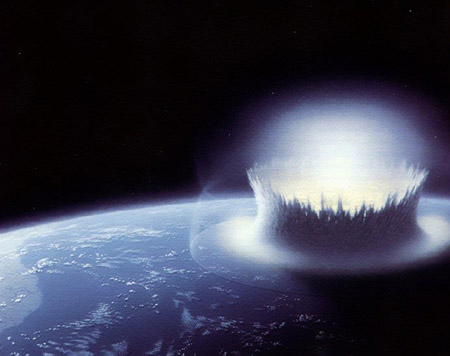 Strewth. Journalist's impression of the moment of impact

Her proposal involves using enhanced solar radiation pressure to move the threatening asteroid off its path to Earth by wrapping it with Mylar film.

Mylar is sometimes used to generically refer to polyester film or plastic sheet. However, it is actually a registered trademark owned by Dupont Tejjin Films for a specific family of plastic sheet products made from the resin Polyethylene Terephthalate. The same solar reflecting material is already used on satellites.

"I'm using a satellite that's orbiting the asteroid and the rotation of the asteroid itself to wrap this ribbon," Ms D'Souza explained to the AAP.

Mylar film covering just half of the asteroid would change its surface from dull to reflective.

"What happens then is light from the sun shines on the body [of the asteroid] so more of it is reflected ... and it actually acts to move it away from the sun and the earth."

Second place was awarded to Andrew Bacon of the Department of Electronic and Electrical Engineering at the University of Bath for his paper entitled The Use of Electromechanical Resonators for the Mitigation of Earth Threatening Asteroids and Comets. Bacon’s concept involves the use of electromechanical resonators to build up waves within an asteroid or comet that would break it up. He will also present his plan at the International Astronautical Congress.

The asteroid 99942 Apophis spends most of its time on the other side of the sun and the next observation period would be in 2011. At that time it should be possible to reconfirm its orbit and determine how close it will actually pass to the Earth. ®