Although our theoretical computer illiterate wouldn't know it, it's immediately obvious that two primary tools power gOS: Mozilla Prism and Wine (version 1.0 in the beta).

Using Prism, gOS is able to create a series of single-purpose web-based applications that can be accessed via the shiny toolbar at the bottom of the screen. Even if you have no idea what Linux is, when presented with a giant red envelope icon, you can probably work out that it checks your mail.

What might be slightly misleading is that it only checks your e-mail if you use Gmail. For other options, you'll have to root around, find Thunderbird and then enter your login information.

What would be really slick is if gOS could somehow ask for your e-mail during the setup process and then, based on the URL, use Prism to either create a Gmail app, Yahoo app, etc. and have it ready to go in your toolbar. At the moment gOS (and every other OS for that matter) lacks such sophisticated tools. 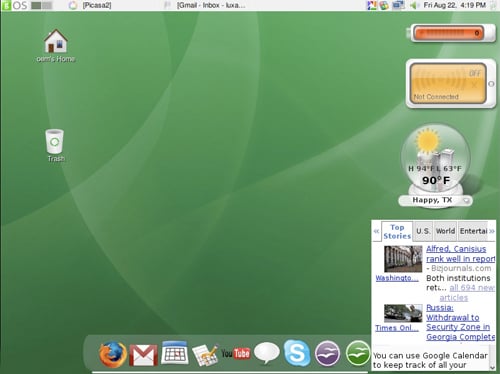 The lower panel (or iBar as it's known in gOS parlance) also contains icons for other Google Services like Calendar, Google Docs and YouTube. If you dig into the main application menu, you'll find more, such as the Picasa photo manager.

There's such a prevalence of Google-based software, you'd be forgiven for thinking that the g in gOS stands for Google.

It would be nice to see gOS offer more stand-alone web apps outside the Google Empire. To be fair, there are a few, like Facebook, but for the most part, Google is clearly the favorite. Perhaps that will change now that Yahoo's Zimbra web-based desktop is in the Ubuntu repositories.

If the Prism-based Google options aren't your cup of tea, there are other apps in the default gOS Gadgets beta, including Skype and Pidgin for chat, as well as OpenOffice.

But it's the default install of Wine 1.0 that's likely to raise eyebrows in the Linux camp. Wine critics argue that enabling Windows apps to run on Linux ends up hurting open source alternatives since people are less likely to pitch in and help improve the open source competitors when they can just run the Windows versions.

If you think that's about the stupidest argument you've ever heard, you're gonna love gOS. Picasa is included by default, and for those that prefer to think of the Gimp as someone scary from Pulp Fiction, it wasn't hard to get Photoshop CS 2 up and running on gOS.

The developers of gOS may not be purists, but that's OK because neither is 99 percent of the PC buying world. And if you've always wanted to get your (supported) Windows apps running on Linux, gOS has just about the easiest setup you could hope for. 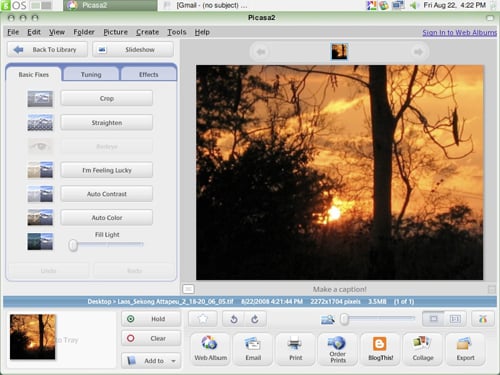 So how does gOS stack up when it comes to common Linux gripes like WiFi drivers or peripheral support? Well, realize first of all that gOS is primarily intended to be loaded into low cost hardware and can thus avoid the usual Linux hassles - WiFi drivers, video codecs, etc. - by being prepackaged to work with specific hardware. As for external devices, the support will be same as you'd find in Ubuntu.

If you just download a copy of gOS and install it, you'll likely hit the occasional bump in the road just as you would with Ubuntu, Fedora or other distros. In our testing, the trackpad scrolling feature of our laptop never worked, but otherwise there were no hardware issue.

If you were to run across gOS by buying a new netbook that shipped with it, we have no doubt you'd be impressed. You open the lid, press on, and it just works. There's little or no setup and common tasks like checking e-mail or web browsing are simple to figure out.

The OS is snappy, which isn't a huge surprise given that most of its feature are powered by Web 2.0, but even those that aren't, like OpenOffice, are plenty fast.

In the end, we have no doubt that gOS will ruffle some feathers, but we also have no doubt that Mom and Dad won't care one bit as they sit in the Maldives emailing "wish you were here" pictures of the beach from their new gOS-equipped netbook. ®

After a long and surprisingly varied dynasty, it's possible they're all FOSS now
OSes4 Aug 2022 | 118