Talk about a spin machine

The X2 prototype superhelicopter had a successful first flight yesterday, according to its makers Sikorsky. The revolutionary (cough) aircraft hovered and manoeuvred using its twin main rotors without problems, but trials of its tail propulsor will take place on a future flight. 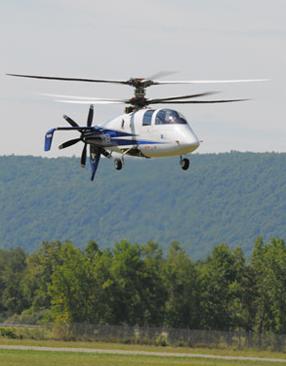 "We look forward to expanding the flight envelope for this Demonstrator and will continue to conduct market analysis to determine the next steps.”

The X2 has two main rotor assemblies stacked atop one another and rotating in opposite directions, a configuration long used by Russian helicopters. However, Sikorsky has added the ability to vary the rotors' speed in flight. Most rotorcraft spin their blades at a fixed rate.

All this allows the X2 to avoid the problems a regular copter suffers as it tries to accelerate through the 200-knots airspeed realm. A normal helicopter going so fast suffers from "retreating blade stall" in which the forward motion of the copter means that the backward-swinging blades become almost stationary with respect to the air they cleave, thus losing lift on one side of the aircraft.

An ordinary Russian-style two-disc coaxial job avoids this, having forward-swinging blades on both sides at any given moment. However, it is still sharply limited in that as speed increases the advancing blade tips run up against the sound barrier.

The X2, however, can slow its rotors as it accelerates, keeping the tips subsonic and continuing to increase speed. As it doesn't need a sideways tail rotor to fly straight (its twin main rotors counteract each other's torque) it can instead have a pusher prop at the tail, giving it the extra forward poke needed to get up to high speeds. There is also active vibration control, intended to dampen out the shakes which have doomed previous efforts along these lines.

Sikorsky whirly-boffins reckon that X2-style whirlycraft, while complex, aren't as fiddly as the rival tiltrotor concept embodied in the V-22 Osprey being fielded by the US Marines (and its civilian BA609 counterpart). As the X2 demonstrator flight tests progress, the engineers expect to show 250 knot cruise speed matching that of the Osprey, and perhaps simpler handling, greater resilience in the face of mechanical failures and lower maintenance efforts.

In particular, Sikorsky's designers think that the X2's lower disc loading will let it seriously outperform the Osprey in the hover, while still being just as good in the cruise. Another possible advantage is that smaller X2 designs can be single-engined - hence cheaper to buy and run - which isn't a realistic option for tiltrotors.

Few of these hopes have been proven by yesterday's initial flight, though. The next few months, as the X2 prototype starts to show what it can really do, will surely be anxious ones for the Sikorsky people involved in the programme. The company has no customers as yet - nor even a production design.

"We are far from having a product," admits Sikorsky president Jeffrey Pino, "but closer than ever to realizing the potential.” ®

Boeing confirms last 747 to roll off production line in 2022

Last four built will be freighters. And mighty freighters at that

Boeing will cough up $2.5bn+ to settle US fraud charge over 737 Max safety

Cash will go to airlines that bought the danger jets, victims' fund

Not going anywhere, just not going to space. A bit like the calamity capsule

'Fragile and ageing legacy systems' need to be replaced – now