'Twas on the good ship Venus...

NSFW Our shock exposé earlier this week of the Portsmouth Historic Dockyard poster campaign outrage promoted a provocative call to Vulture Central from one "Barnacle Bill", who claimed to have been party to the original promotion brainstorm which eventually led to the rather unfortunately accurate depiction of seafaring life back in the days of the tall ships: 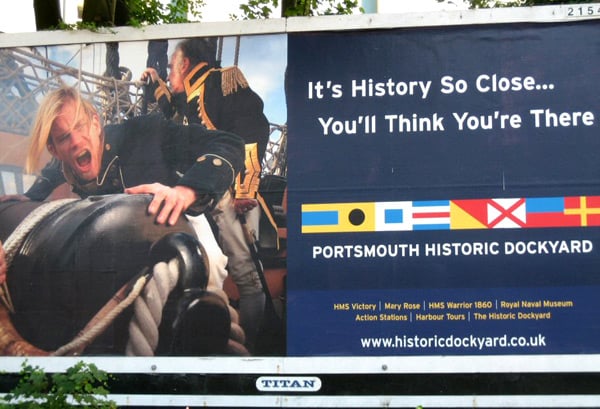 Our informant suggested that the offending poster was in fact one of a series shot, illustrating key moments in Britain's glorious maritime history - few of which were considered suitable for public consumption.

And no wonder, because based on Mr Bill's description, we have been able to reconstruct one of the rejected billboard proposals (click pic for a bigger version):

In case you're wondering, the scene shows one of the less belligerent episodes in the Senior Service's past - the 1803 encounter between HMS The Good Ship Venus and privateer the Martina Navratilova. The former had been dispatched to make all sail to the island of Lesbos and reestablish British dominion of the surrounding seas, where the latter was disrupting vital trade routes by boarding merchantmen and making off with their cargoes of Emma Hamilton cosmetics and racey portraits of comely Nell Gwynne destined for export to the colonial Sapphic market.

In the event, and as history records, things didn't quite turn out the way the Admiralty expected. Our reconstruction shows a Venus boarding party which has stumbled across a member of the Navratilova's crew administering a shipmate what was known as a "lick o' the cat". Suitably inspired by the display, the captain of the Venus offers some light sword-based encouragement to the romping buckaneers, while the first mate has used the classic "bend over that barrel and you'll see the golden rivet" ruse on a midshipman who is now enduring an assault from astern as a result of his gullibility.

Fair play to Portsmouth Historic Dockyard, which posted a comment to our original piece, viz:

Portsmouth Historic Dockyard is delighted, if a little surprised, at all the interest our latest billboard campaign has received. The image used in this billboard was produced 2 years ago in all innocence, but with the hindsight provided by its recent online coverage I can now see that we might have chosen the camera angle a little better!

Whilst I can't see us using the same image on future billboards, it's great to see an attraction as important to Britain's heritage as Portsmouth Historic Dockyard reaching a wider audience. We hope that some of the readers of The Register are encouraged to learn more about us from our website at www.historicdockyard.co.uk or even come and visit us for themselves.

Aye, I've been there meself, me hearties, and I can thoroughly recommend it.