Google is creating its own open source Chrome browser and so spreading its influence over access points to its core search, mail, docs, photo-sharing and other services.

An early - maybe too early - release of a (no really) comic book-style description of Chrome can be found here. The giant, brimming with optimism, megadollars and creativity, says current browsers are inadequate for a world of dynamic web pages that are really applications. "Wouldn't it be great, then, to start from scratch... and design something based on the needs of today's web applications and today's users?" says Google's comic strip product manager, Brian Rakowski. 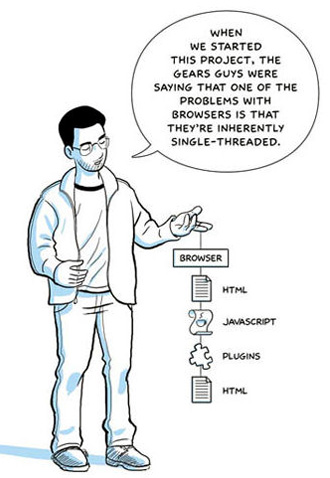 It will launch a Windows Chrome beta today while still supporting the open source Mozilla Firefox browser for the time being. Chrome will use the idea of multiple concurrently executing processes where a process, a kind of mini-browser, runs its own app tab and a Chrome process manager. Halts in one process do not freeze the whole browser. It will also have a faster V8 Javascript engine which is also much better at garbage detection and collection as web pages are visited and then discarded.

Google is trying to force its way into the mobile phone software market with Android, trying to tie the mobile phone user closer to Google's services. (Chrome uses the same WebKit open source rendering engine as Android.) It's aware that Microsoft's near ownership of the desktop/notebook browser market with Internet Explorer helps Redmond direct users to Microsoft apps and services - it is a Live threat, we might say. So Google is going after the desktop and notebook browser access area to help secure user access to its online cloud services and away from Microsoft's apps and coming cloud services.

This logic would encourage Google to build its own netbook - Asus Eee type machines - operating system.

Once again the browser is becoming key software real estate. Who owns the lobby to the building influences which rooms in the building visitors go to? Microsoft has its IE8 browser update project and Mozilla has its Aurora project. Google has decided Mozilla isn't good enough and is going to go its own way. It's not using a proprietary software lock-in approach - instead it's using the open source movement to prevent Microsoft, or anyone else, locking users in to a proprietary Internet access route that is not favourable to Google's interests.

The Internet is becoming a set of serviced offices and Google wants to prevent privateers running visitor reception. Read the comic strip and marvel at how Google, free of legacy software baggage and compatibility problems, is running rings around Microsoft and, coincidentally, encouraging us to use effectively Google-owned pathways to a Google-provided Internet search and application portfolio. We're in danger of becoming Google-eyed. ®

Dear government, this thing is written by volunteers. Take it up with them. Also: shouldn't you know this already ?
Personal Tech6 Feb 2023 |