US war-tech behemoth Northrop Grumman announced yesterday that it had achieved another milestone in its battlefield raygun programme - ahead of schedule. Company blaster cannon execs believe that the first tests at combat power - 100 kilowatts - will take place as planned by the end of this year. 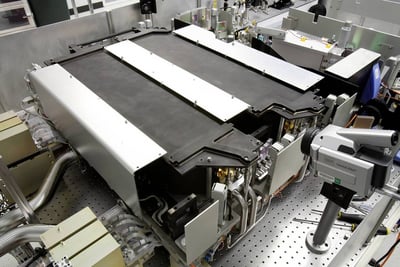 Eight of these, and it's time to fry

Northrop's Joint High Power Solid State Laser (JHPSSL) programme for the US forces is different from existing rayguns, as it uses electrically powered solid state equipment. Older efforts such as the famous nuke-nobbling jumbo jet for the Missile Defence people and the silent, deniable flying sniper gunship for the US special forces use chemical lasers instead.

Chemical lasers are troublesome, as they require large amounts of dangerous fuel and produce equally copious, deadly and corrosive waste products. Thus they can only be viably deployed aboard large transport aircraft, and even then their logistic requirements could prove crippling.

Until lately, however, chem-lasers were seen as the only option, since electric solid-state jobs could muster only a puny beam. Northrop's laser brains think they have this cracked; the company will hook up eight 15-kilowatt "chain" units to produce a mighty 100kW ray. This power level is generally seen as the point at which an energy weapon becomes combat-worthy.

Yesterday's milestone, following the first successful test of a "chain" in March, was the combination of two chains to produce a single beam of 30kW. Northrop blaster chiefs believe it will now be a doddle to hook up a further six and put out a proper arse-kicking beam using electrical power.

"We've achieved all of our major milestones ahead of schedule," added JHPSSL boss Jay Marmo. "We have proven all aspects of our scalable design for 100kW."

The first application for battle lasers will probably be that of burning down incoming bombardment rockets, mortar bombs and the like. Military bases and perimeters in warzones (and some Israeli towns) are typically subject to constant harassing fire of this type, and a proper working defence would be very useful.

Static or semi-static use of this sort could be a good fit for the JHPSSL. Though the company describes the laser weapon itself as "compact" and "portable", it admits that electro-optical efficiency will be in the 20 per cent area - it was "greater than 19 percent" in this most recent test.

That means that a weapons-grade beam will require electrical power input of half a gimegawatt, which is not small in the context of battlefield systems - it's more than half the engine power of a 60-ton Challenger II main battle tank, for instance. The raygun itself may be compact and portable, but the prime mover to light it up won't be. So it could lend itself more to fixed fortifications or warships than to combat vehicles. ®