Sun Microsystems planned to push out a significant update to Java today, but a last-minute snag has made its date of arrival uncertain.

A Sun spokeswoman told us a problem was discovered during final testing of the release candidate of Java Standard Edition 6 Update 10. However, the company would not specify the problem or its severity. Sun said its presently evaluating the issue and can't say when the upgrade will now be ready for public consumption.

Meanwhile, the company says users shouldn't shrug off the still forthcoming update based on its clunky name, Java SE 6u10. It's true that Java updates, unlike major releases, don't mess with any public APIs, and are generally limited to bug fixes. But this time around, Sun has added some interesting new features in hopes of spurring an internet applet revival.

In particular, Sun is trying to tackle the sluggish pace in which Java apps first load.

Sun is also adding Java Kernel, a new distribution method to let Java software load faster. Instead of downloading the full (14.5MB) JRE, users receive a smaller installer (4.5MB) that includes only the most commonly required components. Additional pieces are downloaded as needed in the background.

Update 10 includes a hardware accelerated graphics pipeline based on the Microsoft Direct3D 9 API. Sun said it results in better rendering of applications that rely on translucency, gradients, and other graphical tricks of the trade. 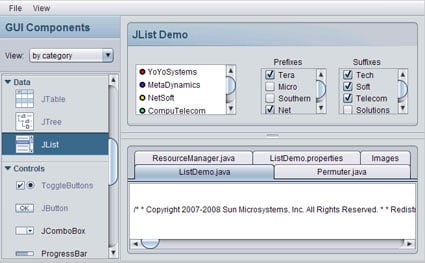 Sun said Nimbus is drawn entirely using Java 2D vector graphics (rather than bitmaps), making it a mere 56KB and able to be rendered at any resolution.

The download site for Java SE 6u10 is obviously not up at this time due to the release delay. If you must have it now, the release candidate is still available, perhaps suggesting the problem delaying the official release isn't melting metal and faces. ®