Forget to re-register did we?

The lapsed website of the UK's National Hi-Tech Crime Unit has been snapped up by an opportunistic German marketeer.

Up until recently nhtcu.org redirected to the official website of Serious Organised Crime Agency (SOCA). SOCA was created in April 2006 with the merger of the National Crime Squad, the National Criminal Intelligence Service, the National Hi-Tech Crime Unit (NHTCU).

NHTCU became SOCA's e-crime division, and its former website was redirected to the official SOCA site. But recently this registration was allowed to lapse allowing a German marketeer Uwe Matt of digitalsuccess.biz to buy the domain on 2 August. 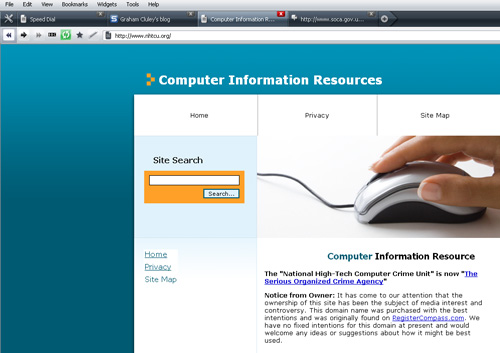 The change was picked up by Graham Cluley, a security consultant at Sophos, in following a link from a BBC story about moves to extradite accused Pentagon hacker Gary McKinnon. The site contained pictures of surveillance cameras and an odd tale about the splendid security performance of a German hotel earlier this week, Cluley reports.

The content of the site has since been changed to include a link back to the SOCA website, though not an automatic redirection. At no point did the site host malware. The German marketeer who bought the site claims his intentions are strictly honourable.

"We have no fixed intentions for this domain at present and would welcome any ideas or suggestions about how it might be best used," the site's new owner (digitalsuccess.biz) states.

Many organisations still link to the nhtcu.org site, presenting it as a source of information on the fight against cybercrime. Between 2001 and 2006 NHTCU had considerable success in bringing a motley crew of would-be cyberblaggers and phishing fraudsters to justice (malware authors were handled by Scotland Yard's cybercrime division). This work led media outlets, computer security firms and British government departments to link to the NHTCU.org site.

Sophos speculates that Matt may have bought the site simply in order to snap up a domain with a high search engine ranking at a bargain price. The concern is that there is nothing to stop the sale of the domain to someone with more nefarious designs.

Cluley suggests its new owners would do well to donate the site back to SOCA. We've relayed this suggestion to digitalsuccess.biz and await its response with interest. ®

Someone may be prepping an NPM crypto-mining spree

Worse, imagine someone finding out you bought one of its NFTs
Cyber-crime30 Jun 2022 | 9