Resistance 2 to hit USA on 4 November

Flagship sequel Resistance 2 will be released on the other side of the Pond on 4 November, Sony has confirmed, along with the simultaneous launch of a special edition version.

The sequel to the PS3 title will clash head-on with Microsoft's surprisingly successful shooter, Gears of War 2, which goes on sale three days later on 7 November.

The current official word on a UK release is November, although we expect Sony to confirm an exact date very soon.

The game will also be offered in a special collector's edition for $80 (£45). This will include a chimera hybrid figure, created by DC Unlimited, a double-sided hard-cover Resistance 2 art book that covers the war-torn US from "two unique perspectives". 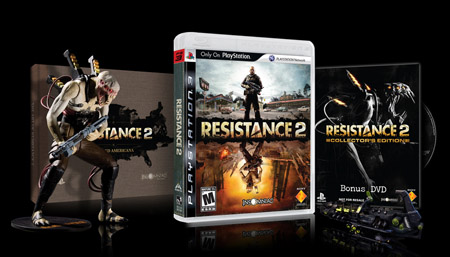 In a similar manner to the Gears of War 2 collector's edition, this bundle will have an in-game upgrade that's only available to those who purchase the special edition - a new "multiplayer weapon skin" that somehow incorporates a new chaingun that uses high velocity armor piercing (HVAP) shells and is called the Wraith.

The collector's edition also includes a bonus DVD that includes a preview of the Resistance: The Gathering Storm novel by William Dietz; a behind-the-scenes video; a chronology of the story line; and a digital copy of issue zero of the Resistance comic book series published by Wildstorm.

Early indications are that this time most of the action takes place across the other side of the Pond. Perhaps this is a result of upsetting the Church of England over the desecration of Manchester Cathedral that took place in the original.

We assume Resistance 2 will have full rumble functionality, so you can enjoy vibrating gameplay with a DualShock 3, like you really should've been able to with the original. But it's OK - that's all in the past now...

Linux developers get ready to wield the secateurs against elderly microprocessors

Use it or lose it

Even slimmer PS3 out next week